By Eliza Laubach and Sarah Kellogg 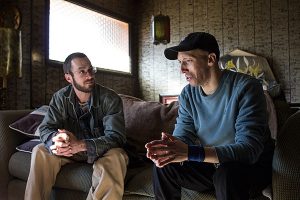 In his home, Zach Dixon, right, talks with Rory McIlmoil of Appalachian Voices about his high heating bills. Photo by Jaimie McGirt

Amidst children’s toys, juice bottles and furniture, a plastic tube snakes through Sean Dunlap’s home in Boone, N.C. The front door to the 1930s farmhouse is covered in thick, red plastic and a giant fan is depressurizing their house. John Kidda, a local home energy contractor, walks through the house holding a tool that produces a visible vapor. He watches to see if the vapor is sucked through the wall or stays floating in the air.

The procedure Kidda is running, called a blower door test, is part of a complete energy audit, which tracks all the places where energy is lost, especially where heated air is escaping.

According to Kidda, the average home has the equivalent of an open window’s worth of air leaks. For Dunlap, the age of his house combined with the style of wood-slat walls and ceilings equals a leakier home.

Dunlap is among three homeowners in the North Carolina High Country who are benefitting from insulation and air-sealing upgrades in their homes. They won an energy contest held by Appalachian Voices to raise awareness about how homeowners would benefit from energy efficiency upgrades and programs to finance them. Dunlap, along with Zachary Dixon of Boone and Vance Woodie of West Jefferson, won free energy audits and special energy upgrade packages. Local home energy contractors, who donated to the contest, will soon begin work on the winners’ houses to make them more comfortable and healthy while lowering their energy bills.

The true root of energy efficiency lies both under and above a home: the attic and crawlspace. Insulating and air-sealing a house’s unconditioned spaces makes a huge impact on the comfort within the house and cuts costs on the home’s energy bill.

The average person spends about 40 percent of their energy bill on heating and cooling, and about 30 percent of conditioned air is lost through ceilings, floors and walls. Many homes in the Appalachian region are old and not updated to current building codes that require more insulation.

Zach Dixon, who is out of work due to a serious medical ailment, uses space heaters to heat his house and chronically struggles to pay his electric bill. The two bedrooms in his house are over an uninsulated garage, which creates a major heat sink. Zach previously used a wood stove in his garage, and had cut out a hole in the hallway floor so that the heat would rise into his house. He no longer uses the wood stove due to a fire scare, however, and the only barrier between the two spaces now is a rug.

According to Dixon, he hopes his electricity will be more affordable once his house is adequately insulated. Contractors will install insulation on the ceiling of his garage and in his attic to bring his house in alignment with current building code. Weatherstripping will also be installed around his garage door and attic hatch, and the crown moulding will be caulked throughout his house to cover gaps that allow cold air to enter and heated air to escape.

Thirty miles away in Ashe County, Vance Woodie, a retired Korean War veteran, lives with his wife in a turn-of-the-century home that was once heated by a coal stoker furnace. The ducts were never replaced when he upgraded to an oil furnace, and the air intake is in the basement, which is still littered with coal. “I guess that’s why the dust still comes in thick in the house,” Woodie says when told of the air quality issue. 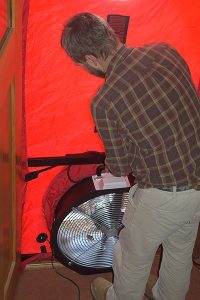 Though most homes do not have coal dust floating around, many houses have ductwork traveling through moldy spaces, a cause for indoor air quality concerns. Woodie and his wife, Thelma, have also noticed that the room farthest away from their furnace is always the coldest, due to their leaky and uninsulated ductwork.

The contractors plan to completely replace, seal and insulate Woodie’s ducts, which is very important for those with central heating, to ensure that all the heat generated by the furnace reaches the conditioned areas of the house.

As for Sean Dunlap, he is looking forward to a tighter house this winter so his children, who are the fifth generation to live there, will have a home to play and grow in without feeling a persistent chill. The comfort of his kids, Dunlap says, is the greatest prize he could have won.

Insulation and Air-sealing Are the Root of Energy Efficiency