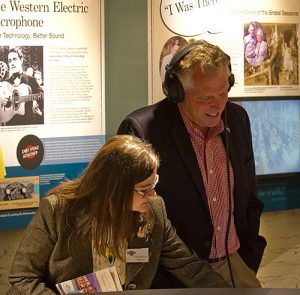 When Salt Lake City native Thomas Richardson took a family trip to the city of Bristol on the Virginia-Tennessee line, in 2003, he had to admit he was a little disappointed.

Having grown up in a family of “old-time music living-room pickers,” Richardson had hoped his cross-country journey to a town where country music got its start would have had a little more to show for itself than a downtown mural depicting a smattering of country music greats.

Last August, Richardson, who holds a master’s degree in ethnomusicology and is pursuing a doctorate in folklore, got his wish with the opening of The Birthplace of Country Music Museum in Bristol, Va. where he currently serves as curator of education and outreach.

The museum is housed in a historical brick building just three blocks away from the recording studio of the renowned 1927 Bristol Sessions. These recordings were the first widely successful recordings of country music, although there were recordings as early as 1922.

In 1927, Ralph Peer, a record producer from the Victor Talking Machine Company in New York, traveled to Bristol, a booming railroad town where regional musicians often jammed together while waiting for the next train. In Bristol, Peer set up a portable recording studio inside the Taylor-Christian Hat Company on State Street.

Over the course of 10 days, he recorded 76 songs by 19 different acts originating from New York to Atlanta, including yodeling sensation Jimmie Rodgers, American folk group The Carter Family, and Ernest Stoneman, the recording veteran who encouraged Peer to travel to Bristol.

While many of the acts were pre-arranged, Richardson describes how A.P. Carter, founder of The Carter Family, just happened to see an ad recruiting local talent. Together, A.P., his wife, Sara, and his eight months pregnant sister-in-law, Maybelle, traveled 20 miles by truck in the heat of summer to record in Bristol, quickly becoming one of the most influential groups in country music history.

Yet, not all acts from the Bristol Sessions have endured such a lasting legacy. While Peer primarily produced “hillbilly records” featuring white, Southern talent, the museum does highlight a little-known record by El Watson, the lone African American act recorded at the 1927 session.

At the museum, visitors can watch the introductory film, “Bound to Bristol,” narrated by Johnny Cash’s son, John Carter Cash. Visitors can then hear all of the original Bristol recordings and learn about changes in technology that made the sessions possible.

The number of original instruments on display include a Gibson harp guitar, a guitar owned by Jimmie Rodgers, and an autoharp made for A.P. Carter’s daughter, Janette, built from wood reclaimed from her father’s old grocery store.

But, Director and Head Curator Jessica Turner says, the last thing the museum wants to do is “museumize” the living musical legacy these Bristol Sessions gave to the region.

“We want visitors to see that our musical heritage is a living tradition, and not just history,” Turner says. “Early country music is still very accessible to people, and we want our museum to help visitors relate to it.”

For this reason, the museum also includes the ultimate music “playroom,” featuring a listening station of contemporary artists’ remakes of these old-time tunes, a mixing station for visitors to recreate the Bristol Sessions songs, and a karaoke booth for guests to belt out the original lyrics — or yodels — as these artists would have done in 1927. 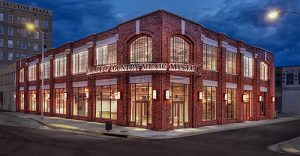 “I always thought this room would be the kids’ room, but I couldn’t have been more wrong,” says Richardson, who has caught grandmas pulling their grandkids into the karaoke booth.

This spring, the museum’s own WBCM-LP radio station and recording studio will begin broadcasting live from the 1920s building, and will feature old-time and bluegrass tunes around the clock.

The seatless Immersion Theatre exhibit presents an open dance space that invites visitors to partake in the ultimate music festival being shown on the curved screens surrounding them.

“Today, [visitors and] musicians who aren’t country music musicians are still being inspired by and learning from the artists who recorded at the Bristol Sessions,” Turner says. “We want to continue that tradition.”

The Birthplace of Country Music Museum

Open daily, except Monday
Tickets range from $11-$13 with children 5 and under free

On loan from the Smithsonian, this exhibit highlights all the different musical genres, from gospel to Cajun, that have influenced the sound of American roots music. Located in the Special Exhibits Gallery on the first floor of the museum.

Corrections
Thomas Richardson has an MA in ethnomusicology and is completing a doctorate in folklore, but does not currently hold a doctorate, as was incorrectly stated in an earlier version of this article. Jessica Turner is the Director and Head Curator of the museum, but not the Executive Director. The Executive Director is Leah Ross. In an earlier version of this article, Jessica was misquoted as the Bristol Sessions were not the first recordings of country music, and the museum takes efforts to point that out. They were the first widely successful recordings of country music, but there were recordings as early as 1922. An earlier version of this article also incorrectly stated that the museum displays a guitar owned by Maybelle Carter, which it does not. The museum is 3 blocks from the Taylor-Christian Hat Company, not one block. We regret the errors.