Each winter, thousands of redheaded, long-legged sandhill cranes descend upon the mud flats and grain fields along the banks of the Tennessee River at the Hiwassee Wildlife Refuge in Southeast Tennessee.

This winter spectacle is inaugurated by the sandhill crane’s distinctive, rolling cries, which emerge from Tennessee skies in late October and early November and continue as the cranes overwinter in the region through February. 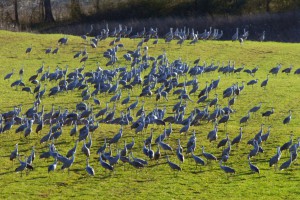 The 6,000-acre Hiwassee Wildlife Refuge in rural Meigs County, Tenn., lures the cranes with its landscape of shallow water and food, offering acres of corn, millet and grain sorghum along with water and mudflats. The cranes roost in the shallow water, and probe for invertebrates in the mud.

The majority of Greater sandhill cranes breed across the Great Lakes region. In late summer and early fall, the birds leave their breeding grounds and congregate in large flocks before beginning their southward migration to traditional wintering grounds in southern Georgia and central Florida. In recent years, however, sandhill cranes have remained further north for the winter months in Tennessee, Kentucky, Indiana and even in southern Ontario on Lake Erie.

Beginning in the early 1990s, sandhill cranes began stopping at the Hiwassee Wildlife Refuge on their way to and from their wintering grounds in Georgia and Florida. Today, as many as 12,000 spend the entire winter there. 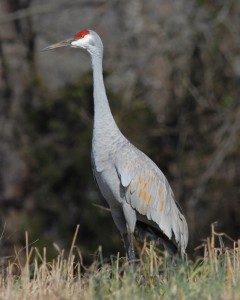 Greater sandhill cranes are the largest sub-species of crane, and average six to seven pounds and close to five feet tall with a wingspan stretching more than six feet wide. Their feathers are varying shades of gray, and the forehead and crown are covered with red skin. Adults have a white cheek patch.

Sandhill cranes mate for life — which can be two decades or more — and remain with their mates year-round. Cranes nest on the ground and often have two eggs, which the pair tends together.

Particularly during spring mating season, but also throughout the year, sandhill cranes will “dance,” which can include bowing, jumping, running, wing flapping and even throwing sticks and grass into the air.

The Greater sandhill crane rebounded from near extirpation in the 1930s when the population was estimated at 25 breeding pairs. Since that time, hunting regulations along with protection, restoration and management of wetlands have allowed the population to increase to more than 87,000 birds.

Today, hunting occurs on four of the six migratory populations of sandhill cranes in Canada, the U.S. and Mexico. Lesser sandhill cranes have been hunted since 1961 west of the Mississippi River, and Greater sandhill crane hunting opened in 2011 in Kentucky and 2013 in Tennessee. The season begins in late November and ends in January.

Jenni Frankenberg Veal is a Chattanooga-based writer and naturalist who enjoys promoting the region’s historical, cultural and natural assets through her work with the Southeast Tennessee Tourism Association. Visit her blog at YourOutdoorFamily.com.