In 2009, after President Obama took office, there was a great deal of optimism among Appalachian Voices and our allies. New agency heads and White House spokespersons parroted the talking point that “the administration will do what the science calls for.” In Appalachia, the science calls for an end to mountaintop removal coal mining.

It’s been nearly six years since the Obama administration took over. In that time, together with those who have been directly impacted by mountaintop removal, Appalachian Voices staff has met with the U.S. Environmental Protection Agency, the Department of Interior, the Army Corps of Engineers, the White House Council on Environmental Quality, and the Office of Surface Mining, Reclamation and Enforcement more times than we can count. On top of that, our supporters have sent tens of thousands of letters to these agencies. 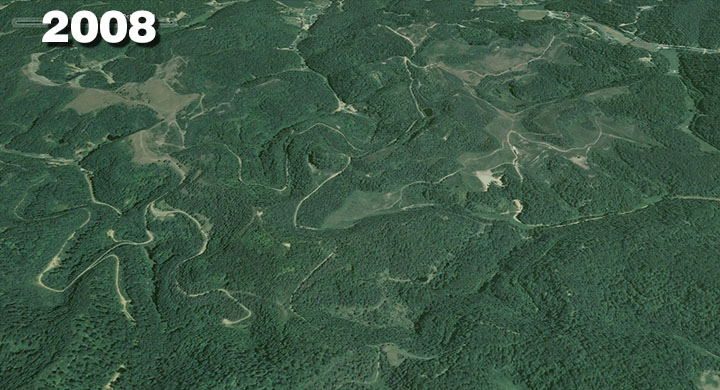 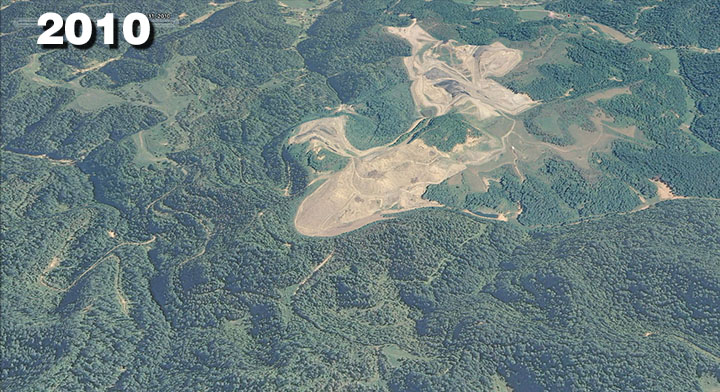 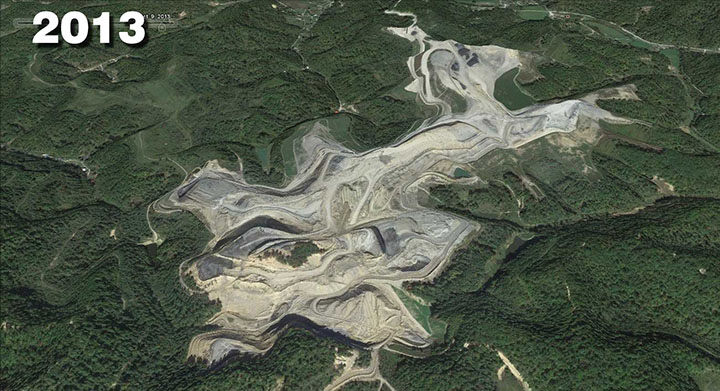 A series of Google Earth images of Magoffin County, Ky., shows the growth of the Right Oakley Surface Mine operated by Licking River Mining, LLC. The images are from June 2008, June 2010 and October 2013, which is the most recent date available.

So what has all of that gotten us? The administration has fallen woefully short of what we had hoped. Of all of the ways to gauge success, one simple question sits atop the list: is mountaintop removal coal mining still happening in Appalachia? Sadly, the answer is “Yes.”

I don’t want to be unfair to the people in these agencies who have worked tirelessly to limit the pollution from mountaintop removal. Indeed, they have done far more to curtail the destructive mining practice than either the Clinton or Bush administrations. While that’s a low bar, they have made significant changes, and there is less mountaintop removal mining today then there was between 2002 and 2008. Part of that is due to market forces, and part of that is due to the actions of the Obama administration. These actions, however, have not been enough.

There is only one sufficient solution to the problem of mountaintop removal, and that is total abolishment. Anything short of that is a failure. At first glance, this may sound extreme, and even unreasonable. But there is never a time when it is okay to blow up a mountain, dump the waste into valleys, and put the health of local communities at risk by filling their air and water with dangerous chemicals, heavy metals and particulate matter. There is a right and wrong way to do many things, but there is no right way to do mountaintop removal coal mining.

The Obama administration should allow the science around mountaintop removal to drive their policy making. Regrettably, they have chosen politics and public perception as their top priorities. They want people to think they are moderate and reasonable, and they are willing to sacrifice good policy in order to maintain that appearance.

When I have met with administration officials, they seem to believe they have done enough work on mountaintop removal. They have taken steps to limit the amount of mines, valley fills and overall pollution. But modest steps are not good enough for us, and they are not good enough for communities in Appalachia who continue to live with the nightmare of mountaintop removal.

Since the beginning of the administration’s first term in 2009, Appalachian Voices has advocated for them to stop issuing any permits for mountaintop removal mines. Instead of refusing all permits associated with mountaintop removal mining, they have chosen to issue permits for mines and valley fills. The Obama administration has issued fewer permits than its predecessors, but permits have been issued nevertheless.

Our next goal was for the EPA and the Army Corps to work together to change the definition of the term “fill material” in the Clean Water Act to exclude mining waste, which would eliminate the use of valley fills, and, thus, eliminate the biggest mines in Appalachia. From the first meeting we had with them, the White House has refused to change the definition of “fill material.” While we pushed at the beginning of the president’s first term, it soon became clear that they would never even consider taking action. 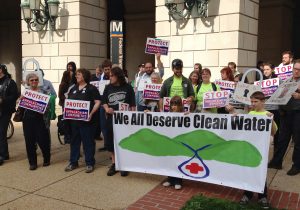 Members of the Alliance for Appalachia rally outside the Environmental Protection Agency’s headquarters in Washington, D.C. in 2013. During the citizen lobby week, members of The Alliance, which is comprised of 15 organizations including Appalachian Voices, met with representatives of the EPA, Army Corps of Engineers, and Office of Surface Mining, Reclamation and Enforcement.

Right from the start, we were met with disappointment, but there still are alternative paths forward. There are several things the administration can do between now and the end of Obama’s term in January of 2017. In order to make long-lasting changes that benefit Appalachia, the EPA, OSMRE, Army Corps and DOI will all need to be involved, and it will take White House leadership to make that happen.

Since 2009, OSMRE has been developing a much-needed Stream Protection Rule. A draft is not expected to be released until the middle of 2015, so the precise contents of the rule are unknown. What we do know is that the rule will regulate surface coal mining in or near streams, and would replace an outdated 1983 rule. It has the potential to be the most important action the administration takes to curtail mountaintop removal, if they choose to include strong safeguards against mining waste polluting Appalachian streams.

Politics will of course play a big role in the final version of the Stream Protection Rule. Coal industry allies in Congress have already put enormous pressure on OSMRE and Department Director Joe Pizarchik. The U.S. House of Representatives passed a bill in spring of 2014 that would prohibit OSMRE from completing the rule-making process. While that effort has been blocked from moving forward in the Senate by Majority Leader Harry Reid (D-NV), next Congress will be different, as Sen. Mitch McConnell (R-KY), an ardent ally of the coal industry, is expected to take over as majority leader. It’s almost certain we will have a fight on our hands in the Senate at some point next year.

The administration’s next opportunity is for the EPA to create a water quality standard for conductivity. For years, the EPA has known that conductivity, a measure of the amount of dissolved solids in water, is a critical indicator of stream health. Based on the best science, mountaintop removal mining results in conductivity levels elevated beyond what is healthy for streams, and a science-based water quality standard for conductivity would result in violations for practically all mountaintop removal mines.

A rule-making can take years, and at this point the current EPA may have already blown their opportunity to do a full water quality standard for conductivity. With the knowledge that mountaintop removal mines result in unhealthy conductivity levels for nearby streams, the EPA should, at the very least, refuse to issue permits for new mines.

The EPA also has an opportunity to create a federal standard for selenium pollution. Selenium bioaccumulates within fish, birds and reptiles, where it causes serious deformities, reproductive failure and death.

The Alliance For Appalachia released a report on the Obama administration’s successes and shortfalls regarding mountaintop removal coal mining and investing in a sustainable future for Appalachia. Read the report here.

The agency is currently considering a new selenium standard, but their latest proposal for a standard is convoluted, unenforceable, and may take away one of our most reliable tools in fighting water pollution from mountaintop removal. Instead of relying on regulators to handle monitoring for the thousands of cases of water pollution from mountaintop removal — a task they have repeatedly proven incapable of doing — citizens need to be able to monitor water in their own communities. Together with community members, we have been able to do that monitoring, but rules that make such monitoring more difficult are a huge step backward. EPA needs to implement a protective selenium standard that is enforceable by citizens and regulators alike.

The coal industry will continue doing everything in their power to prevent strong conductivity and selenium standards. Most industry resistance has been in the courts, but in several congressional hearings over the past few years, members of Congress have spewed coal company talking points in an attempt to put political pressure on the administration. The industry and their allies in Congress will continue to push back against effective safeguards. They will use every dollar and every trick they have to maintain their grip on the region. And they will do everything they can to hold off the day Appalachia can move past mountaintop removal.

It’s true, the Obama administration has taken steps to limit the pollution from mountaintop removal. But mountaintop removal coal mining is still happening, and that is unacceptable. If the White House fully commits over the next two years, they can make huge changes that will benefit Appalachia for generations. If they continue to take half measures, however, it will be an enormous opportunity lost.