Duke Energy, Dominion Resources and other partners are teaming up to build a 550-mile pipeline to better access natural gas produced in Pennsylvania, Ohio and West Virginia, where fracking has proliferated in the Marcellus and Utica shale formations.

The Atlantic Coast Pipeline, which the companies hope will be in service by 2019, would begin in north-central West Virginia, snake through 10 Virginia Piedmont counties and bisect North Carolina before terminating near the South Carolina border. A lateral extension near the Virginia-North Carolina border would stretch to the coast. 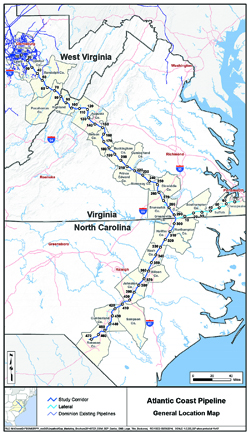 If the pipeline is built, Duke’s gas-burning power plants would be the primary customers and capture nearly half of the projected 1.5 billion cubic feet of gas pumped through the pipeline each day.

Dominion Resources shares the majority ownership stake in the pipeline with Duke and will also serve as the lead builder. Dominion began preliminary survey work in May, which created a stir along the proposed route and spawned a movement of concerned landowners and communities months before the plan was officially announced.

In September, a coalition of 22 groups, including the Southern Environmental Law Center and West Virginia Highlands Conservancy, emerged as the Allegheny-Blue Ridge Alliance with the sole purpose of raising the alarm about the proposed pipeline. The groups say the planned route puts some of the most ecologically sensitive areas in the eastern U.S. at risk, such as portions of the George Washington and Monongahela national forests.

McAuliffe, who has been outspoken in his support for the pipeline while opposing fracking in Virginia, found himself in an awkward spot at the first meeting of the state’s climate change commission on Sept. 10. Claiming the pipeline has “nothing to do with fracking,” McAuliffe later added, “I do not support fracking as governor of the Commonwealth.”

The Atlantic Coast Pipeline must gain approval from the Federal Energy Regulatory Commission and state utility commissions, and there are several opportunities for public input during the process.