One Artist’s Experience with Coal Ash

Editor’s Note: Caroline Armijo began an environmental justice art project after seeing many friends and family die from cancer in her North Carolina community, near one of the state’s largest coal ash impoundments. The Belews Creek coal ash ponds near her community are not among those designated for full cleanup by the recent state coal ash bill. In this excerpt from Armijo’s website, she describes the circumstances that shaped her paper sculpture creation, titled “Gray Matter.” Read the full post at carolinearmijo.com.

In my five years in Washington D.C., I have only known three people with cancer, and only one of those have died. In the last six months alone, I have known five people who have died from my hometown in Stokes County, North Carolina.

[In 2007 the EPA reported that] coal ash gives you a one in fifty chance of getting cancer. Unfortunately, the statistics seem to be much worse at home than estimated in the published reports. When I discussed this with a friend from home, she said that her prayer group included two people with cancer out of four. 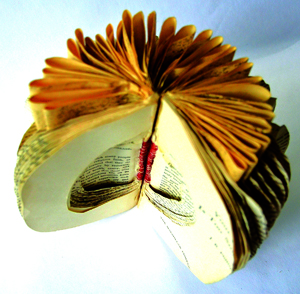 Rolls of collected grave rubbings bound by red stitching give structure to this hollowed-out book. The rubbings were created from the headstones of mixed-media artist Caroline Armijo’s friends and family members, whom she suspects were poisoned by coal ash. Photo by Caroline Armijo.