James C. Justice is larger than the outwardly humble life he leads. A West Virginia native and the Mountain State’s sole billionaire, he is the rare, modern-day coal baron who actually resides in Appalachia. He is beloved by many for rescuing the historic Greenbrier resort from bankruptcy and is well-known for his philanthropic pursuits. At Christmas, he dons a custom-made red suit, and at 6 feet 7 inches, Justice might have even Santa Claus outsized.

But for all his friends, Justice has no shortage of critics. Struggling with the same challenges facing the entire Appalachian coal industry, Justice-owned operations in five states possess dismal regulatory records, earning him a reputation among environmental advocates as one of Appalachia’s worst violators of mining laws. In all, coal mines owned by Justice in Alabama, Kentucky, Tennessee, Virginia and West Virginia have racked up more than 250 violations and cessation orders over the past four years — many resulting from failure to meet reclamation requirements at mountaintop removal coal mines left idle.

There are signs that Justice himself questions coal’s future in Appalachia. Last year, as his operations around Appalachia were cracking, he told reporters for the Associated Press “you may be witnessing the death of the coal industry.” 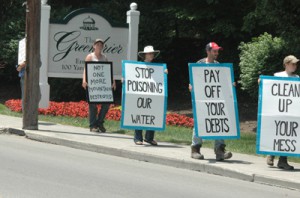 Members of the Justice to Justice campaign march outside of the West Virginia resort The Greenbrier, owned by billionaire businessman Jim Justice, to draw attention to the outstanding violations of coal companies he owns. Photo by Gabby Gillespie, courtesy Justice to Justice.

But not long ago, Justice’s coal interests were expanding. He moved into Kentucky in 2007, buying Sequoia Energy, LLC and Infinity Energy, Inc. In 2008, he acquired Premium Coal Co. and S&H Mining in Tennessee. And he grew his presence in Virginia in 2009, launching Southern Coal Corp and purchasing A&G Coal Group. Today, violations by those companies have spurred citizen groups, the media and regulators to hold Justice accountable.

“After centuries of resource extraction, poverty, and illness, the debt to Appalachia must be paid in full,” stated an open letter to Justice from leaders of Southern Appalachian Mountain Stewards, a southwest Virginia-based group that began a regional campaign this year called “Justice to Justice.” Chris Holmes, a spokesperson for the federal Office of Surface Mining Reclamation and Enforcement, told the Roanoke Times “the civil penalties are piling up.” And a Lexington Herald-Leader editorial in July emphasized that the “crucial point here is not unpaid fines but what they represent: violations of the law that put thousands of people who live near Justice’s mines in harm’s way.”

The story may be far from over, but for now, here is a brief look at how states are responding.

Nearly half of the more than 250 violations Justice faces resulted from problems at mines in eight eastern Kentucky counties. After months of outspoken media coverage and considerable citizen pressure, Justice and state regulators reached a plan in August to settle the spate of violations and ensure proper reclamation. As part of the plan, The Courier-Journal reports, Justice promised to post $10.5 million in bonding, about half of which will go toward reclaiming surface-mined “highwalls.” The deal also allows Justice to resume mining at mountaintop removal sites that were shut down due to violations. Regulators say this will facilitate faster reclamation by reducing enough rock and soil to rubble for recontouring the land after mining.

Before the cessation orders were issued, the Office of Surface Mining held public hearings in Anderson County to address Premium Coal’s failure to meet reclamation requirements at two mine sites. Premium Coal requested the orders be dropped, saying reclamation was not completed because the crew they hired had planted trees upside down with the roots sticking up. Those requests were denied.

Justice’s A&G Coal Group has had its fair share of slip-ups too. In June, the Department of Mines, Minerals and Energy moved to seize $9.9 million from A&G Coal to reclaim an inactive mine at the company’s expense. Justice, who could appeal DMME’s action, claims market conditions left him no choice but to leave the mine in southwestern Virginia idle for more than a year.

Although Justice sold most of his active West Virginia coal operations in 2009, he is still running into trouble in his home state. On Sept. 1, the West Virginia Department of Environmental Protection issued an “imminent harm cessation” to the Justice-owned Kentucky Fuel Corporation after residents reported slurry leaking into Madison Creek in Logan County, W.Va.

Learn more about the Justice to Justice campaign at justicetojustice.com