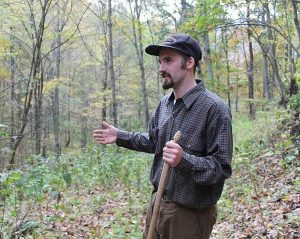 Adam Hall speaks to a group of environmental advocates about the diverse ecology at risk of destruction from mountaintop removal. Photo courtesy of Adam Hall

Depressed towns and waters laced with toxic chemicals have been handed down to West Virginia in the wake of mountaintop removal coal mining, yet many in the community leave these grievances unspoken. Adam Hall, the son of a strip miner in Glen Daniel, W.Va., was once among those who were voiceless on the subject: his father described his work as a paycheck and a roof, avoiding all other details.

But no roof could muffle the deadly reverberations of the Upper Big Branch Mine disaster in 2010, an explosion that left 29 miners dead. The event spurred Hall to break his silence and support efforts to restore communities damaged by coal.

Hall began volunteering with local nonprofit Coal River Mountain Watch. A dedicated member since, he contributes to several ongoing initiatives. One project involves cultivating a community garden to show how local farming can offer a viable economic alternative to mining. He also works on the Tadpole Project, promoting water quality through stream and roadside cleanups. By contributing directly to the community, he hopes residents will see that environmental advocates are not trying to take away jobs; they’re trying to create new ones.

Over time, Hall decided that his work with CRMW still “wasn’t enough,” and so, he says, “I took up direct action as a means of raising local awareness.”

An opportunity to expand his involvement arrived this past October when Hall was attending the Mountain Justice Fall Summit, a gathering where participants cultivate skills and strategies to resist mountaintop removal coal mining. He was leading a workshop on economic justice when members of Hands Off Appalachia — a campaign to end financial investment in companies supporting mountaintop removal — approached him to pitch an idea.

The goal was to hold a peaceful protest at the Stamford, Conn., headquarters of the largest funder of mountaintop removal: the Union Bank of Switzerland. Hall was not initially sure if he would take part in the protest, but after joining HOA members for an unproductive meeting with the UBS head of environmental risk management, he sensed that “they didn’t even care people were dying” and “their policies were just a shield to escape liability.”

On Nov. 25, nearly 30 people gathered at the UBS headquarters. Hall stood blocking the entrance to UBS while inside, other activists chained themselves to the stairs and hung a large banner: UBS Stop Funding Mountaintop Removal. Several others had climbed a nearby crane at dawn to unfurl another banner with the same message. Although Hall was among the 14 protesters arrested, and he has been encouraging others to donate to their legal defense fund.

He knows the fight is far from over, but the only thing he’s tired of is the injustice in his community. Given the entrenched clout of the coal industry, he says that “no change will come in a short amount of time.” Until then, he’s ready to “dig in deep and stay for the long haul.”