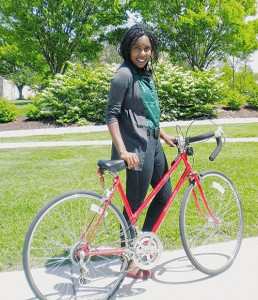 For Virginia Tech student Nneka Sobers, environmental activism is more than an interest — it is a passion that empowers her to promote positive change wherever she goes. Sobers became involved with her university’s Student Environmental Coalition early in her college career, eventually becoming a liaison for the student body’s environmental interests when she joined the Student Government Association her sophomore year.

Sobers contributed to a successful campaign to save more than 11 acres of old-growth forest on Virginia Tech property from clearcutting, and co-authored a campus bill requiring all future construction projects to include a budget for new trees. She also organizes awareness events about pollution concerns from the campus coal plant as a part of an ongoing petition for Virginia Tech to divest its holdings in the fossil fuel industry.

When Sobers took an internship with VT Alternative Transportation, she used the opportunity to apply for a sustainable development grant that would fund bicycle “Fix-it Stations” around campus, giving students free access to basic bike-maintenance tools — three stations were constructed this year. She is currently working on a proposal for a university bike-sharing program, as well as a new policy that would refurbish and donate abandoned bicycles to the local YMCA.

Embodying the Virginia Tech motto Ut Prosim (That I May Serve), Sober says, “If there’s a problem, I will try to fix it. Environmentalism is a holistic approach to creating a better tomorrow, and the best I can do is to lead by example.”