On the Right Side of the Law 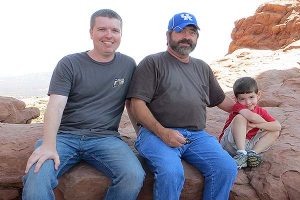 From the gallery of the Kentucky State Capitol, lawyer Wes Addington and a group of women from eastern Kentucky — mostly widows of coal miners — watched the Kentucky House pass a bill expanding legal and safety protections for state miners. The women had advocated tirelessly in support of the law, and witnessing their relief and joy that day in 2007 was one of the most powerful moments of Addington’s nine years working for miners’ rights.

A son of a coal miner and a native of Letcher County, Ky., Addington is a natural fit to represent coal miners and their families. As a legal defender with the nonprofit Appalachian Citizens’ Law Center, he works with ailing miners or surviving family members to ensure they receive black lung benefits, and helps miners exercise their right to speak out about unsafe working conditions without losing their jobs.

“Unfortunately it’s taken very publicized mine disasters to make the kind of changes necessary to make mines safer,” Addington explains, but notes that with every disaster or accident, “there are lessons that can be learned.” Appalachian Citizens’ Law Center tries to identify improvements that could prevent future tragedies, and points out weak regulations to agencies and legislators. The 2007 law that requires Kentucky to inspect coal mines more frequently than any other state was a response to a 2006 Darby mine disaster that killed five miners in Harlan County.

Addington knows there is much more work to be done toward miner health and safety, but believes that regulations are moving in the right direction. He cites the 2010 Affordable Care Act, which simplifies the legal process for federal black lung claims, making it easier for affected miners and families to receive benefits. Changes like that, Addington says, make it a lot more rewarding to come to work every day.