On Aug. 27, Appalachian Voices and our partners in the Wise Energy for Virginia Coalition launched “New Power for the Old Dominion,” a statewide campaign to bring smart energy choices to Virginia. The campaign will organize citizens to urge electric providers, energy policy officials and state lawmakers to increase investment in cleaner energy generation, ultimately creating jobs and protecting the natural resources of the state.

The campaign kickoff included the release of a report offering an alternative to Dominion Virginia Power’s 15-year plan, which relies on new fossil fuel generation while ignoring the vast potential for energy efficiency and renewable energy in Virginia.

“Dominion is heavily dependent on fossil fuels, and with its preferred resource plan, will continue to remain so for the indefinite future,” says David Schlissel, the lead author of the report.

The case for new power in Virginia could not be clearer. As coal companies that use mountaintop removal mining practices and utility companies that burn coal pass the costs of their pollution on to nearby communities, they also lobby against proposed improvements to the state’s outdated energy policy. Due in part to air pollution from coal-fired power plants, Richmond was named the asthma capital of America by the Asthma and Allergy Foundation of America in 2010, 2011 and 2013.

The New Power report shows that there is significant potential for clean energy in Virginia. Among other findings is that opting for a plan that adds almost 4,000 megawatts of renewable energy and conserves nearly 3,000 megawatts through energy efficiency would cost between $633 million and $1.78 billion less than Dominion’s current plan to build two natural gas plants.

To educate citizens about the benefits of clean energy, the campaign includes a series of presentations given around the state and a petition to state lawmakers and the state corporation commission, which sets Virginia’s energy policy.

“All the pieces are in place except the political will,” says Kate Rooth, Appalachian Voices’ campaign director. “That’s where the New Power for the Old Dominion campaign will make a difference, in growing a statewide citizen movement to press our leaders to make this a reality.”

New Power for the Old Dominion is the next chapter of years of successful organizing in Virginia. Member groups of the Wise Energy Coalition have defeated a 1,500-megawatt coal plant in Hampton Roads that would have consumed massive amounts of mountaintop-removal-mined coal in 2012, and prevented a 1,200-acre mountaintop removal mine atop Ison Rock Ridge in Wise County. 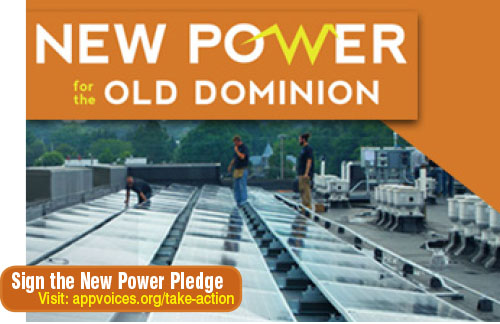 Read the New Power report and learn how to organize a presentation in your community at newpower4va.org.