Four out of five power plants currently have no limits on the levels of heavy metals they can dump into rivers and lakes. The U.S. Environmental Protection Agency, however, is preparing to change that, and in the process they are hearing from impacted citizens around the country.

Since June, more than 165,000 people have submitted comments to the EPA regarding its efforts to regulate the toxic wastewater produced by coal-fired power plants. In April, the agency proposed a range of options to reduce toxic discharges into waterways. The proposal constitutes the first update in three decades of the wastewater regulations under the Clean Water Act. 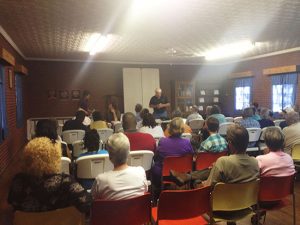 Residents of the Belews Creek area gather at a community meeting on power plant wastewater hosted by the Pine Hall Ruritan Club.

The proposed effluent limitation guidelines have the potential to protect more than 23,000 miles of waterways from up to 5.3 billion tons of toxic wastewater per year.

Appalachian Voices, the publisher of The Appalachian Voice, assisted North Carolina citizens living near coal-fired power plants in voicing their concerns to the EPA. Many were worried that water pollution may be impacting their drinking water and local waterways.

Like many in the area, Beck’s water comes from a private well, leaving him worried about potential water contamination caused by coal ash waste seeping into the groundwater. Coal ash is laden with toxicants including arsenic, mercury, lead, chromium and selenium and, according to Physicians for Social Responsibility, has “the potential to injure all of the major organ systems, damage physical health and development, and even contribute to mortality.”

Wayne Watkins, a Vietnam War veteran, lives near Duke Energy’s Belews Creek Steam Station in Pine Hall, N.C. Watkins is originally from the area, and moved back in 1994 to live in the house his grandfather built.

When he first returned, Watkins was excited to catch his own dinner from Belews Lake near his home. However, he began to worry when he started seeing fish that appeared twisted and deformed.

Watkins was not aware of the selenium poisoning that occurred from the Belews Steam Station’s discharge of toxic waste water directly into Belews Lake from 1974 to 1985. During that time, the lake became so toxic that 18 of its 20 fish species died off.

Susan Fischer lives about a quarter of a mile from the coal ash impoundment at Duke’s Asheville Steam Station. Although she is on municipal water supply, she is concerned because the current wastewater permit for the coal-fired utility allows it to discharge directly into the French Broad with few limits on what heavy metals the wastewater may contain.

“Clean water is an economic boost for us in northwest North Carolina in particular,” writes Fischer. “The French Broad River brings in a lot of income to our area, with lots of boaters and kayakers who love the river. We have worked hard to clean the river up … are we going to be made to spend more money to clean up after Duke Energy? They should be required to use the best technology to keep their waste out of the water.”

If the strongest proposed regulatory options pass, it will cost power companies less than one percent of their revenue to protect the nation’s waterways from the toxic waste water that, according to the EPA, accounts for 60 percent of all the water pollution in the country.

The state initially proposed that Duke pay a $99,000 fine and investigate the source and extent of groundwater pollution. Concerned citizens and environmental groups considered the settlement insufficient given current evidence indicating the scope of water contamination.

During the 30-day public comment period that ended Aug. 14, the DENR received nearly 5,000 comments, which included calls for Duke to enact a full cleanup and receive a greater fine. Based on these comments, the state added stronger language and tighter deadlines regarding Duke’s water contamination monitoring.

Many environmental groups remain dissatisfied, criticizing the changes as minor tweaks that fail to address wastewater discharges to adjacent bodies of water. “(The state) disregarded the views of thousands of North Carolinians and has failed to require Duke Energy to clean up its pollution of Mountain Island Lake, the Charlotte region’s drinking water supply,” Frank Holleman, Southern Environmental Law Center attorney, told the Charlotte Observer.

Tests of local wells three years ago revealed levels of contamination associated with coal ash to be well above state health standards. Toxic contaminants were also found in both the French Broad River and Mountain Island Lake; Duke disputes the significance of this contamination.

In the Charlotte Observer, Duke Energy spokeswoman Erin Culbert expressed approval of the proposed settlement, stating that “regulators need the outcomes of these studies to make informed decisions about whether corrective steps are needed, and what those are.”