Members of the Wise Energy for Virginia Coalition rejoiced recently over news that plans for the state’s largest proposed coal-fired power plant were put on hold.

Old Dominion Electric Cooperative, the third largest power utility in the Commonwealth, announced earlier this fall that it was suspending the permitting process for its proposed coal plant in the Hampton Roads area of Surry County. The 1500-megawatt, $6 billion plant would have been the state’s largest polluting power plant.

Appalachian Voices and the other four members of the coalition aided residents in a fierce, years-long battle to stop the proposed plant. The coalition credits mounting citizen objection, including pressure from ODEC’s own customers and shareholders — as well as declines in the coal market — for this long-awaited common sense decision. More than 8,000 people signed a petition to the Army Corps of Engineers opposing the plant.

“The suspension of plans for this plant, which would belch as much carbon dioxide as about 2 million cars, is a great sign for the fight against climate change. We look forward to seeing ODEC move away from fossil fuels and toward a future powered by wind and solar energy,” said Beth Kemler, Virginia state director with the Chesapeake Climate Action Network, a coalition group.

Coalition member groups hope to work with ODEC on projects that provide more affordable and climate-friendly sources of energy for its customers, and pledge to keep a close eye on the utility to ensure it does not revive the coal plant proposal in the future.

Participating In the Democratic Process

At the beginning of September, Appalachian Voices headed to the front lines of our democracy at the Democratic National Convention in Charlotte, N.C.

During the week, we handed out hundreds of “I Heart Mountains” buttons and engaged countless people on the need to end mountaintop removal coal mining, protect our waterways under the Clean Water Act, and transition Appalachia to a cleaner energy future. Joined by Tennessee resident Ann League, we walked the long halls of the convention arena and talked with dozens of lawmakers and leaders, including Environmental Protection Agency Administrator Lisa Jackson, Senator Dick Durbin (D-IL), and Virginia gubernatorial candidate Terry McAuliffe.

Dr. Matt Wasson, our director of programs, joined Ann League and Catawba Riverkeeper Rick Gaskins to participate in a televised panel discussion on the tragedies of the coal cycle, from mountaintop removal mining to the disposal of coal waste. We attended another special panel on the “Future of Energy” to support Sen. Ben Cardin, a champion of the movement to end mountaintop removal and transition away from coal. 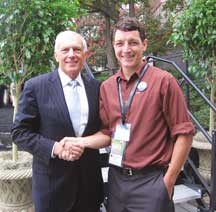 Appalachian Voices also teamed up with Greenpeace to host a special “Bourbon, Bluegrass and a Better Future for Appalachia” reception at the New Gallery of Modern Art in downtown Charlotte.

The event was a smashing success, with impassioned calls to end mountaintop removal and rousing endorsements of our work from special guests including Sen. Cardin, green jobs guru and AV’s Board Advisory Council member Van Jones, and North Carolina Representative Pricey Harrison.

This marked the first time that AV brought our message to a national political convention. We also applied to attend the Republican National Convention in Tampa but were not awarded passes to that event.