Evolution of a Cattle Farm

Meeting the Needs of Cows and Streams 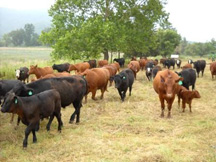 Guille Yearwood’s cattle wander through a pasture. Over the years, Yearwood has made changes to raise better, more profitable beef and decrease his farm’s negative impact on the environment, including many streams and creeks on his property. Photo by Austin Hall


After nearly 30 years of practicing continuous grazing on his cattle farm in rural Virginia, Guille Yearwood transformed his farming style to better serve his cattle and the environment.

Yearwood, owner of Ellett Valley Beef Co. in Christiansburg, Va., had settled into farming the way most land grant universities teach. He farmed in the “conventional high-input way,” using chemicals, herbicides, pesticides and fertilizer to increase grass production, and employed continuous grazing, a system in which his cattle stayed on one pasture throughout the grazing season.

“Sustainable alternatives were presented to me about six years ago, and I embraced that,” he says.

Yearwood made the leap to rotational grazing, a system in which he moves his cattle frequently between several smaller pastures. That switch essentially eliminated Yearwood’s need for fertilizer.

“What I found over the years as you use [fertilizer] is that it requires more and more fertilizer every year to produce the same amount of crop,” Yearwood says. “The more you use it, the more expensive it gets because more is required.”

Yearwood says grass production increased by 40 to 50 percent as soon as he began the new grazing pattern. His cows have more abundant and better-quality grass to eat, and Yearwood no longer has to worry about fertilizer runoff from his fields to the water system.

“What I’m trying to do is grow healthy beef in a sustainable fashion that does not require a lot of input,” he says.

Several years before his transition to grass-fed beef, Yearwood decided he had seen enough damage to the creeks by his cattle. He contacted the Natural Resources Conservation Service in Virginia to begin work with them on a Best Management Practices program to fence his cattle out of the North Fork of the Roanoke River. This spring, Yearwood participated in another program to fence his cattle out of wetland areas.

Yearwood pursued these projects to conserve his streams, but by working with the NRCS, he was able to provide an environmentally-friendly watering system that his cows could easily access. The NRCS paid for 75 percent of the cost of the fencing, well drilling and underground water piping, making it affordable for Yearwood. With rotational grazing, it was necessary to get water to each paddock, and the NRCS worked with Yearwood to make that possible.

“When you take [the cows] out of that environment, everything else seems to thrive, from the riverbanks to different types of fish, crawdads, turtles, frogs, all of that stuff,” Yearwood says.

But it’s not just the wildlife that returns to the streams; there is a visual difference in the cleanliness of the water.

“When I was pumping water out of the creek [to water the cattle], when our neighbors’ cattle would get in the creek, I would see a wave of dark green water come through,” Yearwood says. “You could easily see that there’s a lot of bovine fecal matter going into that stream.”

According to a Grazing Practices Report from North Carolina State University, feces and urine from animals can carry pathogens that get into the water and can be passed to other animals. Cattle are also rough on riverbanks, causing excess sediment to be released into the river.

“You want some sediment entering your river,” says Robert Creed, a biology professor at Appalachian State University. But drastic increases can cause habitat loss for animal and plant species.

According to Creed, proper stream management can push the stream back to good health, but it takes a long time.

“Any time you start to reduce those effects, you’re going to improve water quality in terms of sediment levels by letting that bank stabilize with vegetation and reducing erosion of sediment into the stream,” Creed says. “But it takes time. It may take 15, 20, 30 years before those effects start.”

Yearwood says a vast majority of cattle in his area still have access to creeks and streams.

“There are more people who are beginners getting into farming who are doing things like I do — sustainable type grazing,” Yearwood says. “The people who’ve been in the business longer as a whole do it as they always have with continuous grazing — no grass management involved.”

But Yearwood is not the only one doing this program through the NRCS or one of the many other similar programs funded by the local, state or federal government to keep livestock out of waterways. Tom Greene, district conservationist at the Christiansburg Service Center, says more people want to participate in these programs than they have funding for.

“We get something like $12-14 million in Southwest Virginia, and we have way more applications than we have money to cover,” Greene says. “There’s always a backlog of applicants out there.”