Climate Change, Extreme Weather, and Our Relationship to Water 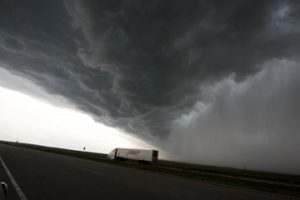 A majority of Americans believe that climate change has contributed to recent extreme weather, such as the destructive wind storm known as a “derecho” in June (above). Understanding the links between climate change, extreme weather and the threats they pose to freshwater is essential to developing a responsible relationship with our most valuable resource. Photo courtesy National Weather Service

There is no doubt that we are worried about water. We accept that, as both a human right and requirement, any threat to this precious but limited liquid deserves our attention.

Last year, when Gallup conducted its annual poll to gauge Americans’ foremost environmental fears, nearly 80 percent responded that they are “greatly concerned” with the pollution of rivers, lakes and reservoirs, the pollution of drinking water, and the maintenance of the nation’s supply of freshwater for household needs, compared to only half responding with concern about global warming. But after years of increasingly extreme weather, it’s becoming clear how related the two really are.

Consider one of the many recent anecdotes of inaction on global warming. Just days after the North Carolina state legislature passed a widely mocked bill that outlaws the science used to predict future sea level rise, the U.S. Geological Survey announced that the Atlantic coast is disappearing three to four times faster than the rest of the world’s coastlines. State lawmakers, and the coastal developers that backed the blatantly anti-science bill, may have missed the memo.

But as the seas rise, so does the nation’s concern for the future of the climate. More than 70 percent of Americans peg climate change as the culprit that has contributed to extreme weather in the past month, including wildfires that redefine “wild,” a devastating drought and a record-breaking heatwave. NBC meteorologist Doug Kammerer himself made the news by saying bluntly during a forecast, “If we did not have global warming, we wouldn’t see this.”

Don’t want to take the weatherman’s word for it? The data presented in the National Oceanic and Atmospheric Administration’s Climatic Data Center’s “State of the Climate” report speaks for itself. According to the report, in June of this year, 170 all-time high temperature records were broken or tied — some topping 110F. By the beginning of July, 56 percent of the United States was suffering from drought and more than a dozen states, including Kentucky, Tennessee and West Virginia continued to see significantly below average rainfalls.

All in all, the first half of 2012 was hotter and drier than any year since weather data was first recorded in 1895. Even if the heat hasn’t kept you indoors, the abrupt storms are likely to.

Take the wind storm known as a “derecho” that wreaked hurricane-like havoc on several states in the Midwest and mid-Atlantic. The storm arrived without the typical warning signs as families prepared to celebrate the Fourth of July. It left millions without power and, especially in parts of West Virginia, without clean water.

As it is with all life, water is at the center of these extremes.

The worst conditions of the widespread drought remain concentrated in the Midwest Corn Belt, where a large percentage of the world’s corn is grown. Stunted crops have caused the U.S. Department of Agriculture to slash projections by 12 percent, which in turn has spiked prices.

Farmers aren’t the only ones after water. In some parts of the U.S., privatized water rights are going to the highest bidder. Earlier this year in Colorado, companies that provide water for hydraulic fracturing outbid farmers for water rights traditionally used to irrigate their fields. As drilling operations and drought-induced demands increase, there is just not enough to go around.

Despite the challenges to creating a responsible relationship to water, there is a bright side. Every day, more people wake up and face the need to address our water woes. They come to realize that by understanding and respecting the the resource we have, businesses, farmers and families position themselves to succeed in a water-stressed world.

The scourge of the energy and extractive industries has undoubtedly taken a toll. But Appalachia’s abundant waters — emerging modestly from the mountains and harboring aquatic ecosystems galore — remain a resource to be revered. From the foothills to the highest peaks, the sound of rushing water is never far away. Listen closely and you’ll hear reminders of water’s worth.

We recognize and respect water’s role in our lives, and this issue of The Appalachian Voice is dedicated to just that. Beginning on the following page, read about the impact energy production and extractive industries have on water. Travel to Kentucky on p. 11 and meet Rick Handshoe, who has taught himself how to fight for water quality in his community. Learn how Guille Yearwood is incorporating water protection into his cattle farming style on p. 12. Hear how one group uses fly-fishing as a way to heal physically and psychologically wounded veterans on p. 13. And on p. 14-15, survey the economic impact of our region’s mighty rivers.

If you’re like us, your favorite swimming holes, rivers and spots beckon during the summer. In our special center-spread pullout we explore some of our region’s opportunities for water-centric recreation. Don’t miss the special feature on Appalachia’s picturesque paddle trails, a refreshing way to enjoy our waterways while educating a new generation about protecting them.