Build a Rod, Tie a Fly: In Search of Healing Waters 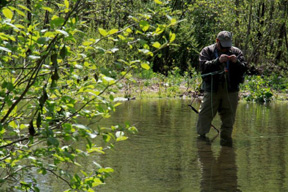 When David Frady, a 46-year-old from Leicester, N.C., woke up this morning, he felt like going fishing. So far, the rain has kept him indoors, where he’ll practice tying flies, work on the small boat he volunteered to build or pick his guitar, his other favorite stress-relieving activity.

Frady says he’s always been a fisherman. He began tying flies when his wife was pregnant with their son almost 12 years ago. But one day, he quit.

Although he has no history of heart conditions in his family, a series of heart attacks after serving in Operation Desert Storm left Frady with three coronary stents and an implanted defibrillator. “I was just depressed, sitting on the couch and feeling sorry for myself,” he says. “I had not tied a fly in probably five years or more.”

Then one day Frady saw a poster at the veterans’ hospital in Asheville for Project Healing Waters, a nonprofit that teaches fly-fishing as therapy and treats the river as a rehab facility. He called, attended a meeting, and quickly rediscovered his passion for the sport and the possibility of a better life.

“To talk about it makes the hair stand up on my arms,” Frady says, thinking back. “I want to say it saved my life.”

“It’s really not about the fishing.” That is the first thing Ryan Harman, the Western North Carolina coordinator for Project Healing Waters Fly Fishing, says.

An avid angler, Harman means that when he’s on the river with the wounded warriors who participate in Project Healing Waters, fishing is just a means to a higher end.

To Project Healing Waters, a “wounded warrior” is just that, a disabled veteran — physically or psychologically — of any war. Warriors with wounds that aren’t combat-related are also welcome. During trips to the rivers surrounding Asheville, N.C., lead by Harman and local volunteers, the participants have ranged in age from 19 to 93.

“All of these individuals have experienced warfare to one degree or another,” says Harman. “In this type of group that understands what they’re going through, it’s a good place for them to release some of their anxiety and to start the healing process.”

Project Healing Waters, which provides all training, equipment and trips free of charge, began as one might expect: with the cast of a fly rod. One day while staying at Walter Reed Hospital in Washington, D.C., Captain Ed Nicholson, a Navy veteran and fisherman, took to the lawn to practice his cast.

“The first time he did that, one or two people stopped and asked what he was doing,” Harman recalls. “The next day 10 or 15 people stopped and watched and by the third day he had 25 people, everyone standing around wanting to cast his fly rod.”

Nicholson knew he was onto something. If fly fishing on the land brought together this many vets, he wondered what getting them on the water together could accomplish.

Frady doesn’t have to wonder. He describes being on the river as “peacefulness.”

“Once you get out there, you’re concentrating on what you’re doing at the time,” he says. “The stresses and the thoughts and the memories, all the things that we feel every day – they kind of wash down the creek.”

For anyone who has been through combat, says Frady, emerging unchanged is impossible. And companionship goes a long way.

“You aren’t the same person,” he says. “To join a program where you’re with those that have the same life experience, it really helps a lot.”

But on Asheville’s Project Healing Waters program’s river trips and outings, don’t expect to hear war stories. Fishing tales are main course of the conversations, and friendly jabs about who caught the biggest fish that day are passed around the campfire while Frady plucks his guitar.

Across the country, Project Healing Waters participants are finding the same peacefulness that Frady discovered. With the participation, instruction and countless volunteer hours of groups like the Federation of Fly Fishers and Trout Unlimited — the fishing club with over 150,000 members in about 400 chapters — this innovative approach to physical and emotional therapy has expanded nationwide. 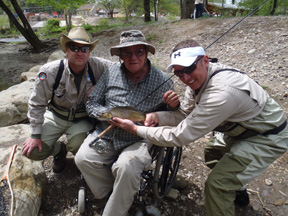 No matter their age, disability or fishing ability, Project Healing Waters welcomes veterans into the world of fly-fishing. The group provides all instruction, equipment, travel and accommodations to participants at no cost.

“We’ve been doing it long enough to know that in any given population of veterans there is going to be a percentage of them that are going to have an interest in the program,” says Alan Folger, the Veteran Service Program Coordinator for Trout Unlimited. “We also know that every community in the country has a population of veterans. But it takes community to make it work.”

As it turns out, most fly fishing groups are happy to help, whether it’s providing instruction, guides for group outings or managing a local Project Healing Waters program. Currently, there are more than 130 active programs in the U.S. and one in Canada; the organization will soon add a program in Germany and potentially one in Australia, Harman says.

While Harman, Folger and volunteers instruct and immerse veterans in fly fishing, there is one more essential component. At local veteran’s hospitals, recreation therapists like Joanie Ledford help identify the interest and connect vets with Project Healing Waters.

“I concentrate on what the veterans themselves enjoy doing and adapt that activity to their ability,” Ledford says, because, while it’s not really about fishing, that’s where it starts. Some don’t take to it, and that’s OK, she says. For those who do, it can be transformative.

When Frady recently taught a fly tying class at the Asheville V.A., a “first-timer” who had never tied a fly or been fly fishing sat quietly in the room. “I’ll tell you what,” says Frady, “When he tied that first fly, you could feel the sense of accomplishment that he had.” At the next meeting, he arrived holding his own fly tying kit.

“When the guys come together they see themselves as fly fishermen,” Ledford says. “I think that’s what brings them out of their shell. You can see the sparkle in their eyes as they accomplish more, they start looking you in the eye and standing up straighter.”

Frady, for one, found healing in the water. His excitement recounting a recent trip to West Virginia is as pure as a child’s who has just caught his first fish.

But like Harman, Frady knows that the organizers, volunteers and most of all his fellow wounded warriors have helped him heal more than the water or fly-fishing.