If you’ve ever seen what you thought was a gray squirrel on steroids, what you actually saw was most likely a fox squirrel.

While this bushy-tailed, colossal squirrel is common throughout most of Appalachia, it has not been seen in the North Carolina mountains in several decades. But now these furry creatures are on a path to making an incredible comeback in the northwestern region of the state.

Already abundant in Virginia and further north, data provided by hunters in North Carolina counties — including Ashe, Alleghany and Watauga — during the last several years shows that more and more fox squirrels are expanding into areas of the state near the Virginia border, says Chris Kreh, district wildlife biologist for the North Carolina Wildlife Resources Commission. 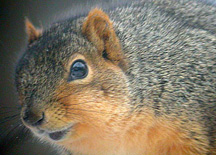 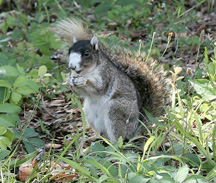 While fox squirrels can sometimes resemble gray squirrels in coloration, there are noticeable differences. In eastern regions such as the Appalachians, the squirrels can sport more of a reddish coat than gray squirrels, with dark brown and even black faces and backs. The most distinguishable have striking while patches on the nose, feet and tail. Photos credit: Jeffrey S. Pippen

Kreh says that changes to the forests in the northwest part of North Carolina in the last decades could be the reason that the picture is different now than it was 20 or 30 years ago. Because they do not have the agility of the gray squirrel, fox squirrels prefer less-dense forests, including those of the Appalachian Mountains thinned by human activity since the 1800s.

Adult fox squirrels are much larger than the gray squirrel. They are typically about 20 to 26 inches long and can weigh one-and-a-half to two-and-a-half pounds. Abundant throughout much of the U.S., the fox squirrel has two main subspecies: the Midwestern and the Southeastern. The Southeastern subspecies are dark and sometimes almost black in color, while the Midwestern fox squirrel has a wide variety of looks including red, blonde, brown and even orangish, and sport dark faces or backs and sometimes even a striking white face, tail and feet.

The subspecies of fox squirrel that is migrating into the mountains of North Carolina, however, is more likely the Midwestern fox squirrel. Unlike their eastern cousins that are more at home in longleaf pines, the Midwestern subspecies prefers hardwood forests with open canopies — commonly found in the Appalachian mountain landscape.

The Midwestern fox squirrel is expanding its ranges on the border of Virginia and North Carolina. Fox squirrel populations are abundant in Carroll and Grayson counties in Virginia, and those numbers are starting to trickle down into some counties in North Carolina, such as Ashe, Alleghany and Watauga.

The North Carolina Wildlife Resources Commission gets most of its data from sportsmen’s reports, including live observations, road kill finds and photos. They also have a system for logging and reporting wildlife, which helps create a census on the population of the fox squirrel.

According to Kreh, the more open forests adjacent to human development suit the fox squirrel more than the gray squirrel, adding to the expansion. Property owners in those counties can assist the fox squirrel’s transition by planting walnut trees and other hardwoods.

Kreh also mentioned that, as the Midwestern subspecies expands south and eastward, their frisky cousin from the east is venturing westward, setting the stage for what could be a intriguing future for the fox squirrel.