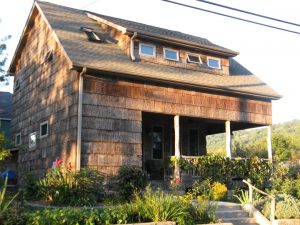 Writer Nan Chase and her husband have found that the cost of heating their bark-clad, two-story house is surprisingly low. Although the house has southeastern exposure, they seldom use air conditioning because the thick bark - in conjunction with covered porches and indoor ceiling fans - usually keep the temperature well below 80 degrees. Photos by Nan Chase.

Four years after completion, the rustic bungalow near downtown Asheville, N.C., is a local landmark. Covered in big overlapping shingles of tree bark — rather than the usual wood, brick or stone — it looks odd, a bit like a square tree.

Although the unusual house appears antique and rooted in the past, it was built only in 2008. Bark may look old fashioned, but as a recently rediscovered and re-engineered building material, it fits the profile of a modern, environmentally sustainable choice for new construction — residential or commercial.

The shingles are crafted from poplar bark that is salvaged from timber operations, and otherwise would be burned, mulched or left to rot. Bark shingles contain no chemicals, and are processed solely with sanitizing kiln heat. Bark’s insulating heft keeps utility bills low, bark requires no paint or stain, and shingles can last 75 years or more without maintenance.

I’ve learned all this because that Asheville house is mine. What began simply as a way for my husband, Saul, and me to have a house that never needs painting has grown into a living laboratory experiment.

Although bark-covered structures date back millennia, the first appearance of a neatly squared bark building shingle — from American chestnut trees — dates back to 1895 in the Southern Appalachian Mountains. Architect Henry Bacon invented the style in Linville, N.C., where he used hand-trimmed slabs of two-inch-thick chestnut bark to cover homes. Some of those summer homes are still occupied today, the exteriors still untreated. 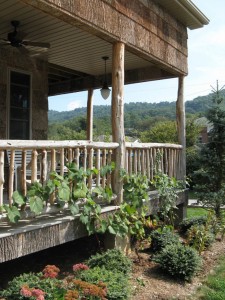 When the chestnut blight wiped out the main source of bark in the early 20th century, bark houses were no longer built. But in the past two decades, bark shingles have made a comeback, now almost exclusively in poplar.

“It’s fantastic, it’s local, it’s durable, it’s cool,” says Matt Siegel, green building director at the Western North Carolina Green Building Council in Asheville. But he cites the shingles’ price as a possible deterrent to increased use and says that installation takes more time. Bark shingles can cost twice as much as conventional cedar siding, but the upfront costs even out over time, experts say.

“Twice the cost upfront sounds like a lot,” says Brent Simmons, manager of green programs and sustainable product sales at Mountain Lumber Company in Banner Elk, N.C. “But if you spread it over many years, the increase is less than one percent for the whole cost of the house. It’s a minimal up-charge for something maintenance-free.”

When buying bark shingles, consumers need to make sure they’re getting a product that lives up to its potential. Practice has shown that bark’s longevity depends on three things: how well it’s dried by the manufacturer to kill any microorganisms and stabilize the product, how well it’s stored before installation and how well it’s installed.

Consumers should make certain that suppliers guarantee that they use bark only from managed forest lands, with certification from such organizations as the Forest Stewardship Council, the Sustainable Forestry Initiative or the American Tree Farm System. Buyers should also use builders who have been trained in bark installation.

“It’s not rocket science to put it on,” explains builder Daniel Hemp, “but you have to learn how to do it right.”

My own interest in building a bark house came while I was helping to write a book on the subject, “Bark House Style: Sustainable Designs From Nature,” with Chris McCurry. By the time Saul and I had the the opportunity to build on a vacant lot in Asheville, the research had convinced me that there was no other material so tough or interesting for the price.

Each shingle is unique, with lovely patterns and bits of moss and lichen. Occasionally a squirrel pops its head over the porch railing, looking for nuts on this curious “tree.” Blogging rumors to the contrary, these houses do not attract woodpeckers searching for bugs. Kiln-drying kills any insects and the sugary layer insects may inhabit in living trees.

The bark house sparked a minibuilding boom around us. Saul and I have bought a second vacant lot and hope to build another bark house.

Editor’s note: An earlier version of this article ran in the Christian Science Monitor in 2009.