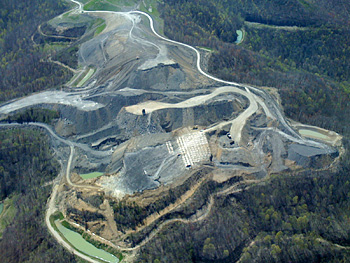 One of the most toxic coal seams east of the Mississippi River has cast a dark shadow over the land and people living in its boundaries.

Landon Medley, a resident and former county commissioner of Van Buren County, Tenn., has witnessed the impacts of mining in the Sewanee coal seam firsthand. “I remember being invited to dinner at a home on Cagle Mountain,” says Medley. “One wall of the home had subsided due to mine blasting, and the green beans that were being cooked for dinner turned blue in the water due to the acid mine drainage.”

More than 300 abandoned mines are sprinkled throughout the East Tennessee landscape — a majority are in the Sewanee coal seam — where runoff containing acid mine drainage, highly toxic to humans, animals and plants, has polluted waterways and communities.

While the seam is not currently being mined in Tennessee, the threat of future surface mining efforts is real. Currently, the Canadian mining company Tiacme is exploring opportunities within the pristine Rock Creek watershed on Walden’s Ridge, despite the area’s federal designation as Land Unsuitable for Mining. The Rock Creek watershed is located on the northern end of Walden’s Ridge near the Smithtown community in Bledsoe County.

Prior to enactment of the federal Surface Mining Control and Reclamation Act of 1977, mines in Tennessee were not regulated, making it difficult to create a comprehensive picture of the environmental damage from mining within the Sewanee coal seam. 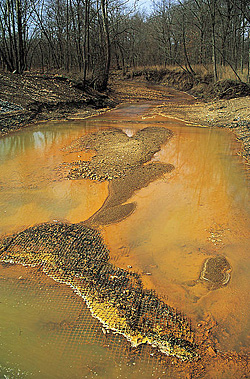 Acid mine drainage from the Sewanee coal seam has groups across the state calling for a ban on surface coal mining on he toxic seam. Photo courtesy of D. Hardesty, USGS Columbia Environmental Research Center.

Underlying the Cumberland Plateau, the Sewanee coal seam’s largest and most toxic sections are thought to be limited to East Tennessee. According to James Macfarlane’s 1873 book, The Coal Regions of America, “The Sewanee Division includes that part of the table-land bounded on the east by the Sequatchie Valley, on the south by the Alabama line, and on the north by White and Cumberland Counties.”

Medley says that eight counties in Tennessee have been particularly impacted by acid mine drainage but that the actual extent of the Sewanee coal isn’t well known.

Medley lives near two abandoned Skyline Coal Company mine sites on Walden’s Ridge that border the Sequatchie and Van Buren county lines. Skyline declared bankruptcy and ended mining practices there 20 years ago; however, acid mine drainage devastated water quality in the area. The federal Office of Surface Mining stepped in and created a state trust fund to treat the acid mine drainage coming off the two sites. The water has been treated for the past six years and will continue to be “in perpetuity,” says Medley.

Currently, citizens of Tennessee are limited to three legislative tools to protect their communities from the impacts of surface mining in the Sewanee coal seam: the Water Quality Act on the state level and the Lands Unsuitable for Mining petition and Surface Mining Control and Reclamation Act on the federal level.

Local and statewide public interest groups are working with state legislators to find tools that would protect the citizens and waterways of Tennessee from the devastating impacts of acid mine drainage.

“We must addresse the Sewanee coal seam because of its impacts on water,” says Medley, a long-time member of Statewide Organizing for Community eMpowerment in Tennessee. “We know that if mining is allowed, it will result in acid mine drainage, which will impact water quality, which will impact tourism in this area. This is not just an environmental issue — it is directly linked to the economic growth of the state and employment as well.”

To learn more about efforts to end surface mining in the Sewanee coal seam, visit the Statewide Organizing for Community eMpowerment website at socm.org.

Jenni Frankenberg Veal enjoys writing about the natural world and exploration opportunities found within the southeastern United States, one of the most biologically and recreationally rich regions on earth. Visit her blog at www.YourOutdoorFamily.com.