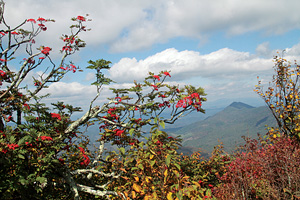 The Elk Knob Summit Trail begins with a casual amble through canopied woods. The 1.8 mile trail is all uphill, and after rising gently for the first quarter mile, carves a series of switchbacks up the mountainside, eventually meeting an old dirt road at the summit. At the top, hikers are greeted by stunning panoramic views of the Blue Ridge and Black Mountains to the south, the Amphibolite Mountains and Virginia to the north, and west into Tennessee.

The summit trail, completed in September 2011, is the first at Elk Knob State Park, one of North Carolina’s newest parks. More than that, the trail is distinguished by the hands that built it — most belonged to volunteers.

“People climb mountains to get to the top,” says volunteer trail builder Tom Layton. “The reason we built the trail the way we did is to make the top of the mountain accessible.”

On Sept. 4, about 30 volunteers from the past five years finished the trail to the summit. The first volunteers came from a South Carolina youth group. Over the following years, groups ranging from high school clubs and college classes to Boy Scouts and Mountain Alliance members ripped out roots, leveled ground, and moved rocks — some the size of a small car. Weekly workdays attracted a core group of about 10 area residents and regular High Country vacationers. Park Superintendent Larry Trivette enjoys former volunteers showing the trail to their families. “They feel like they have an investment in the trail and in the park,” he says.

What could be a strenuous climb is made into a pleasantly physical hike by the trail’s steady grade, gravel tread and steps cobbled with stones from the mountain. Several benches, composed of trailside rocks, provide opportunities for snack breaks or meditations with nearby lichens.

Along the trail, patches of sunlight filter through buckeye and beech branches. Some areas are carpeted with drooping grass, in other spots the moist earth is cloaked in moss and mounds of fall leaves. Elk Knob is one of 10 peaks in the Amphibolite Mountains of northwestern North Carolina. The Amphibolites, part of the Appalachian Mountain chain, are composed of a dark metamorphic rock and break down into a sweet soil that supports rare plants. 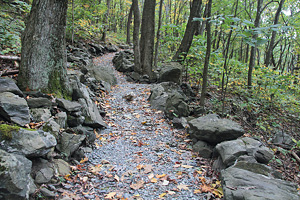 The structural strength of the trail is apparent even to an unobservant hiker. A level gravel tread is banked on the down-slope side by a stone crib wall to thwart erosion. In steep places, the trail crew dug a trough, installed rocks plucked from the surroundings, created a rock wall, and then built the trail tread on the uphill side. Trivette discovered that the trail became slick rather quickly, and decided to invest in a gravel trail surface. Volunteers spread a barrier of geo-textile fabric on the trail bed to keep the gravel from sinking into the mud and then raked the gravel over the fabric.

“During my career I designed and built products with a short life cycle,” volunteer Kim Mitchell says. “In retirement, I was yearning for a chance to be involved in a project that would produce something more permanent.”

Still, nothing in nature is static. A rainy September washed out sections of trail that weathered four years of storms, and in one spot an audible rivulet spilled out from the base of the trail. Trivette notes that Elk Knob is a particularly wet mountain. Water doesn’t just hit the trail during downpours, it seeps out of the banks and builds up before washing down the path.

“You can’t just build a trail and leave it alone,” says Trivette. “If we want the trail to last for generations to come, we have to spend time in this generation working on it, continually correcting it.”