A new series of proposed natural gas pipelines will give many states better access to natural gas reserves of the Marcellus Shale, a formation of sedimentary rock that covers much of the Appalachian Basin. The pipelines will connect to larger interstate lines to reach more customers in the northeastern United States and possibly Canada. The price tag for the proposed system is around $2 billion.

Since 2008, major drilling companies have exploited the large natural gas reserves of southwestern Pennsylvania. The epicenter of the fracking movement, 3,000 wells have been drilled there in the past three years, with thousands more planned for the future.

Hydraulic fracturing has quickly risen to the forefront of environmental agenda. The horizontal drilling method’s destructive effects on forests, wetlands, streams and habitat are widely publicized.

In other fracking news, the U.S. Geological Survey recently slashed the estimates of recoverable gas in the Marcellus Shale from 410 to about 84 trillion cubic feet. The previous guess by the oil and gas industry-friendly federal Energy Information Administration was only off by 80 percent.

Soaring Back to Protection 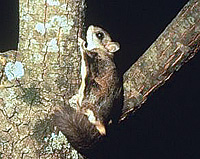 A federal judge restored endangered status for the Virginia northern flying squirrel, stating that the U.S. Fish and Wildlife Service violated the Endangered Species Act by removing the animal’s protected status. The ruling concluded that the service violated their own recovery plan by removing the species, and implies that recovery plans for other endangered and threatened species cannot be ignored or revised without public input, according to a statement by the Center for Biological Diversity. The center, along with Friends of Blackwater, the Wilderness Society, Heartwood, the Southern Appalachian Forest Coalition and WildSouth, filed suit in 2009 over the squirrel’s delisting.

This flying squirrel appeared on the planet 30 million years ago and is native to the high-elevation hardwood forests of West Virginia and parts of Virginia. Mostly, these squirrels are known for their aerial acrobatics propelled by underarm skin flaps.

Duke Energy is planning a rate increase that will impact electricity bills and the cost of consumer goods. In these difficult economic times, many North Carolina residents are concerned about a 17.4 percent increase in residential power bills.

The N.C. Utilities Commission will hold a public hearing in Charlotte, N.C. on Tuesday, Oct. 11, at 7 p.m. in Room 267 of the Charlotte-Mecklenburg Government Center, located at 600 East Fourth St.

The Ore Knob Mine Site in Ore Knob, N.C. has its share of pollution problems, including a failed dam at the end of a tailings impoundment and acid mine drainage into the Ore Knob Branch, part of the New River watershed. But the Environmental Protection Agency has restored the dam and rerouted the stream by a half mile to give it a cleaner run into the Little Peak Creek.

With the cooperation of the National Committee for the New River and donations from Foggy Mountain Nurseries, the EPA planted test plots of different native trees and shrubs to determine which plants most effectively minimize sediment runoff.

In a move that stunned some in North Carolina’s renewable energy and environmental community, the N.C. Court of appeals ruled that “whole” trees, timbered solely for burning in electrical power plants, can be considered a renewable energy resource. The contentiousness of the decision centers around the concern that allowing newly fallen timber, instead of waste wood product, as fuel in combustion power plants will lead to clearcutting and increased pressure on Appalachian and Southeastern woodlands. Detractors of the move believe the court’s ruling violates the spirit and intent of N.C.’s renewable energy portfolio standard.

Amy Sohner, executive director of Bluegrass PRIDE, says environmental education “makes students understand they have a choice and a voice about the state their environment is in.”
She says schools appreciate their curriculum because it uses real-world situations to teach core skills. “We’ve proven that environmental education can improve test scores for the subjects we teach,” she says.