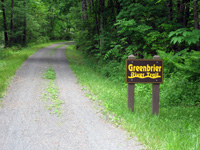 A gentle, one percent grade makes the Greenbrier Trail perfect for multiple sports, such as biking, trail running, and skiing in the winter. Photo by Joe Tennis.

Near a quiet place called Renick, W.Va., though the railroad is long since gone, a crossing sign remains. And so does the former path of the Greenbrier Division of the Chesapeake and Ohio Railway, now the Greenbrier River Trail.

Stops called Horrock, Beard, Thorny Creek and Stony Bottom line this railroad path, converted into a multi-use trail spanning 78 miles and a century of history in the Greenbrier Valley of West Virginia.

Every mile or two, another wild scene of the Greenbrier River unfolds—inviting, especially on a warm summer day. Here and there are tiny waterfalls; nothing big in the first six miles of the trail in Greenbrier County, near Hopper, but still just as delightful as the river and the picnic tables, ferns, rhododendron and rocky cliffs scattered along the trail.

About halfway between White Sulphur Springs and the lovely town of Lewisburg, the trail heads northward, breezing past the rocky banks of the Greenbrier. Here, the trains once rumbled past North Caldwell, the trail’s southern terminus, near Stonehouse Road.

The train opened up development in West Virginia in communities like Renick, which bustled with activity in the early 1900s. Now, in Renick, mowed fields border what used to be the railroad.

About six miles north, on either side of the 402-foot-long Droop Mountain Tunnel near Horrock, a young-growth forest provides a lush, green jungle around the path, visited by thousands each year on foot, bicycle, horseback and cross-country skis.

Inside, the Droop Mountain Tunnel appears almost spooky. It’s dark, damp and pitch-black at its center.

The well-maintained trail’s smooth, crushed-limestone surface boasts a one-percent grade; it drops only about 220 feet in elevation from north to south. The trail looks like a quiet county lane with grass growing in the middle; every five or six miles, you’ll find another parking area. 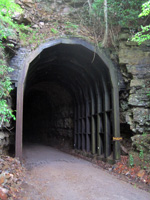 The entrance to the 402-foot-long Droop Mountain Tunnel. Photo by Joe Tennis.

“(The Greenbrier River Trail) is well-maintained and not really crowded,” said David Hungerford, a retired wedding photographer from Port Tobacco, Md. “We could bring our horses down here and ride it, and snowshoe in the wintertime. It’s a good trail.”

On a rainy Friday morning, Hungerford and his wife, Susie, explored the trail on bicycles, tracing about 30 miles in a day.

Much of the trail itself remains refreshingly remote despite its popularity, as it lies adjacent to the Monongahela National Forest and Seneca State Forest, with both places giving trail-users even more room to roam.

Now overseen in conjunction with Watoga State Park, the Greenbrier River Trail owes a debt to Mark Ligon Hankins, whose continuing efforts persuaded the CSX Corporation to give land for the trail’s development. Hankins then worked with state and federal agencies to turn the rail into a trail. A sign along the trail describes Hankins as “a caring man.”