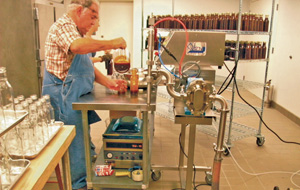 Jack Fischer had a great idea for a product, but no space in which to make it.

“At home, I’d make nut butters out of raw, sprouted almonds and walnuts for my family,” he said.

Fischer knew his nut butters were a marketable product, but because of health department regulations and the size of his kitchen, they were illegal to sell or even give away outside the home.

“They went over everything involved in production, including regulations, labeling and branding,” Fischer said. “At the end of the class, they let us bring in our finished products and have them reviewed in front of a panel of people from the local food industry. Each panelist bought a jar of nut butter on the spot.”

This encouragement was enough that Fischer started producing his nut butters at the community kitchen soon after. He is now selling his organic nut butters—made with raw honey from the nearby Haw River—in at least four farmers’ markets a week.

“If I was trying to produce on my own, I would have had to secure major grants to set up a kitchen space,” Fischer said. “My overhead would be at least double, if not triple, what it is when I rent hourly space at the community kitchen.”

In counties throughout Appalachia, community kitchens are offering people sanitary, industrially equipped spaces in which to make value-added products to sell at farmers markets, restaurants, retail stores and online.

In the town of Annville, Ky., the Jackson County Farmer’s Kitchen offers a restaurant style kitchen, an outdoor farmer’s market stand and a dock to accommodate Kentucky State University’s mobile poultry processing unit. To start producing at the facility, an entrepreneur submits their recipe to the health department for approval.

“Right now we have 16 different companies using the facility regularly,” said Kitchen Manager Greg Golden. “They come in and I train them on all the equipment and supervise in case they need help.”
Because the Jackson County Farmer’s Kitchen is certified and inspected by the health department, products made there are legal to sell to the public.

“We’ve got folks that sell at farmer’s market stands, some that wholesale to retail outlets and others who sell online,” Golden said. “One of our kitchen users just shipped his product to Switzerland.”

For a flat rate of $100 per day, a farmer can bring as many chickens as he has to be processed in the KSU mobile unit.

“When the poultry unit comes out, farmers from all over come to take advantage of that,” said Golden. “The whole operation is certified, so poultry processed there can be sold anywhere in the state.”

The Jackson County Farmer’s Kitchen has also provided jobs for four women in the community. The women have been trained on all the kitchen equipment. People who come in to use the facility can choose to hire them by the hour if they need help with production.

The idea for the kitchen was born out of Kentucky’s post-tobacco-farming decline. The Jackson County Agricultural Extension Service saw that local farmers were struggling because markets were scarce, and decided to create a multi-purpose agricultural facility so farmers could have better access to a market stand and kitchen.

Appalachian Alternative Agriculture of Jackson County was instrumental in securing grants and funding to get the project off the ground, and they opened their doors in 2008.

The rate for kitchen use is $35 an hour, so an eight-hour day comes to $280. The first person to use the kitchen made 2,000 jars of salsa in a single day, resulting in an overhead of 15 cents per jar.

The Jackson County Farmer’s kitchen holds classes in micro-processing at the facility. The hope is that entrepreneurs will have enough success with their products that they will grow out of their home kitchens, and then the Community Kitchen will be ready for them.

The local high school chapter of the Future Farmers of America and many local non-profit organizations have been granted free access to the kitchen to make products to sell for fundraisers.

“The reason this place was built was to help people develop a product, make a little at a reasonable cost, see if it works out and next time grow the number of cases they make and expand on their business,” said Jeff Henderson, an agent for the Agricultural Extension Service. “It is important to our community to help people become entrepreneurs.”