Story and photo by D.A. Hawkins 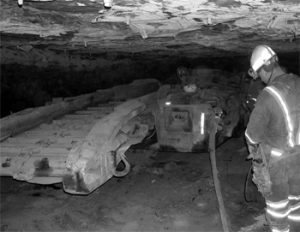 Spend any length of time talking with a group of underground coal miners and you are sure to hear “war stories” about close calls with severe injury or even death. Every aspect of the job requires a constant vigilance for potential hazards. Numerous miners have been killed by sections of the mine roof or coal ribs falling suddenly on them. Many others have been killed when crushed by heavy machinery in confined spaces.

As a coal miner, for the longest time I worried more about the easiest ways to be killed suddenly rather than the long term debilitating health effects of mining. Whenever the subject did come up, it often centered upon Coal Worker’s Pneumoconiosis (CWP), also known as “black lung.” I eventually realized there was a much bigger picture, with CWP being the tip of the iceberg. Underground mining not only fills a miner’s lungs with dust, it wears their body out and can even give them cancer.

With ever increasing production quotas, coal mining has become faster paced during recent years. The rigorous work required in confined spaces leads to joint deterioration, especially within the lower back, knees, shoulders and neck.

Newer generation miners suffer from such injuries despite only a few years of experience in the mines. Those who are financially bound to their jobs rely upon pain medications to continue working. As a result, prescription medication abuse within the coal industry has steadily risen over the past decade and spread throughout the surrounding communities.

“I can’t get on disability,” one young miner, wishing to keep his anonymity, explained. “There is no way I can afford my house payments and support my family on social security checks. I have to do what is necessary to keep going an’ keep working.”

Also of concern is the constant exposure to various chemicals in the mines. Ted Mullins, a retired electrician who worked in an underground coal mine/prep plant complex in eastern Kentucky, is fighting an ongoing battle with leukemia.

“I sometimes wonder if a lot of the cancer me and many of my friends have been diagnosed with came from chemicals we were exposed to in and around the mines,” Mullins, who now lives in Lexington, Ky., said. He listed off several names; all were men he knew from the mines who have since died from cancer.

“Miners today don’t think about their health years down the road,” he said. “I’m just glad I retired union and have [United Mine Worker’s Association] retirement medical coverage. If I didn’t, there is no way I could afford to fight my leukemia.”

While the U.S. Mine Safety and Health Administration and various state mining agencies have put various laws regarding diesel equipment in place, miners are left to wonder if it will be enough. “NIOSH cannot definitely determine that current diesel regulations will result in the elimination of all diesel health concerns,” stated Ed Blosser, Public Affairs Officer for NIOSH. “The reason for this uncertainty is that there is still incomplete information concerning the level of exposure to diesel emissions that may cause health effects.”

Anyone living within the coalfields will tell you that a coal miner who spends his or her life working in mines will be left with little health to enjoy retirement. Many miners make every effort to warn their children about following their footsteps into the mines, hoping the next generation will strive for a better education and avoid a similar fate.

As life would have it, many of those children become enticed by the high wages of coal mining as compared to other jobs in the coalfields. They look only at the short-term gains while ignoring the long-term losses.
As one of those young miners so eloquently put it, “You’ve got to die someday.”

Dangers On the Surface

Surface mining, while not as unhealthy as its underground counterpart, is still considered one of the more hazardous professions in America.

According to a Department of Labor coal fatality report, surface mining incidents accounted for approximately 30% of total “on-the-job” coal mining deaths in the last 5 years. The most common surface mining risks include falling from highwalls, electrocution and crushing injuries from heavy machinery or large rocks.

Additionally, a report by NIOSH shows that during a special screening between 1996-97, 6.7% of surface miners were diagnosed with silicosis, a potentially fatal lung disease caused by exposure to silica dust. Dust samplings taken by the MSHA from 2003-2008 showed that dust overexposures continued to occur, with drillers and driller helpers having the highest risk of exposure.