Acknowledging A Time For Transition 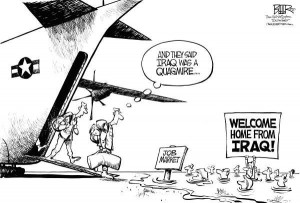 A friend of mine has a son who is serving in Afghanistan. His home is in the mountains of Boone, North Carolina, where tourism and a sizable state-run university dictate a relatively stable economy and jobs to be had once he—God willing—returns.

But there are many such sons and daughters with homes in coalfield regions of West Virginia, Virginia and Kentucky who will not be as fortunate in their post-tour-of-duty lives. Available jobs are at an all-time low in these regions, known to be among the poorest in the country. The coal industry blames federal regulations on mountaintop removal coal mining for the decline in jobs.

According to the bureau of labor statistics, however, the 1950s saw 120,000 direct coal miners in the state of West Virginia alone while in 2008 there were around 20,000. Most of these job losses stemmed from the switch from underground to surface and mountaintop removal mining, which requires fewer workers and maximizes company profits.

The poverty rate in Appalachia hovers near a staggering 24%, drug usage is at an all time high and an economic future dependent on coal seams beyond peak production looks grim.

If elected officials in West Virginia, Kentucky and Virginia do not cease backdoor deals and intimate relations with the fossil fuels industry and begin to conceive of more realistic—and 21st Century—alternatives, a regional depression of epic proportions seems imminent.

Those who can afford to will migrate to other states, though lack of education or training in industries other than coal mining may relegate many to low-paying jobs with little opportunity for advancement.

Those without the means to move will be left to scramble for odd jobs and remnants of coal-related jobs, while the poorest slip deeper into poverty, some living in houses resembling little more than shacks and suffering from poor health and malnourishment.

Is this what the fossil fuels industry calls the American dream?

Environmental groups have talked for years about ‘now’ being the time to create the foundation of a new economic plan for Appalachia. In truth, Yesterday was the time for laying the foundation. By today we should be implementing said plan, so that we might in days to come reap the rewards with a renewed, vibrant regional pride. Instead, residents of the coalfields are economic prisoners of a system constructed with 19th century ideals and fueled by the pursuit of profit.

We are out of time.