Goats Galore! Forging a Life as a Dairy Farmer 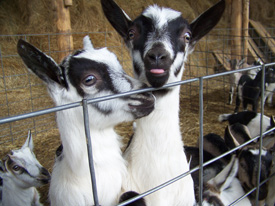 Young kids at play in their pen. Photo by Julie Johnson.

John and Andrea Woodworth operate a small goat dairy farm outside of Gate City, Va. Thirty-five alpine goats provide the family with enough milk to make a variety of cheeses, which they sell at local farmers markets as well as online.

The Woodworth’s journey to enter the dairy market has taught them much about the value of patience, trial-and-error, and diversifying their skills.

John and Andrea decided to begin farming in 1994. After a bad experience with a troublesome cow, they realized that smaller livestock was better suited to the steep geography of their land.

They bought two milk goats and two billies, and soon assisted their milkers in birthing twins–named Adam and Eve– and quadruplets.

“I’d never helped birth a kid before, but around here, the things I don’t have be licensed to do, I do,” John said.

While raising their own family, Andrea and John expanded their herd and in 2001 decided to pursue a state license to sell their dairy products.

The dairy industry is one of the hardest for small farmers to gain entry to. Strict sanitation laws make overhead costs expensive and the licensing process requires multiple visits by state officials.

“We poured the concrete footers for the pasteurizing room in 2001, and finally had the license in hand in 2008,” said John. “Everything had to be done in stages.” The final product is Ziegenwald Dairy, which means “goats woods” in German, Andrea’s native language.

Andrea’s inheritance money helped pay for the $14,000 pasteurizer and the large press used for their hard cheeses. The rest of their equipment was acquired and installed piecemeal, some handed down from neighbor farmers or bought used.

Electric charts that resemble seismograph machines record the exact temperature of the cooling tank, pump system and pasteurizer. The charts and daily logbook are collected by their inspector and carefully monitored for any discrepancies.

“Its most important to keep that inspector involved every step of the way,” John said. “That state inspection is always a trial.”

Sanitation precautions are extremely important at the dairy, both for inspection and quality production. The dairy building is a three-room cinderblock structure, with each room separated by a self-closing door.

The milking room is beside a large pen where the goats play in the mud. Three large guard dogs roam the yard, protecting the herd from coyotes and wolves.

When Andrea comes to the gate at morning and evening milking times, the herd pushes up against the door, fighting for first dibs at the milking platform. Andrea knows each one by name, and handles inevitable goat antics with a firm hand.

Six goats at a time are hooked up to a suction milking system, and their product is pumped into a cooling tank in the next room. There, John empties the milk into buckets and fills the pasteurizer in the cheese-making room, where bags of soft cheese hang above a stainless steel sink, slowly draining whey to be fed to the hog lolling in the mud outside.

The cheese making process is Andrea’s craft, and the quality of the product truly reflects the hours of hard work that go into its creation. The Woodworth’s cheese has become a hot seller at the Jonesborough Farmers Market, and orders from restaurants and retail markets have begun to trickle in.

Having access to this market, as well as their community supported agriculture program (CSA), has allowed John and Andrea to find a niche for their product. Blending the cheese with fresh herbs and fruits from their garden helps expand their product line, and gives buyers a chance to try new varieties every time they shop at the farmers market.

In addition to dairy farming, Andrea is a registered nurse and John raises heirloom vegetables to sell to a seed catalog service.

“Its extremely hard to make a living on a farm if it’s your only thing,” John said. The Woodworths also help run the Highlands Bioproduce CSA.

“We’ve already met, if not exceeded, our family capacity for production,” John said, “but we keep on going.”

Ziegenwald does not fully support the family, but operates as an essential part of their diversified farm.

Luckily, the popularity of goat-milk products has drastically increased in the past few years.

“The lactose in goats milk breaks down much easier than that of cow’s milk,” Andrea said. Many lactose-intolerant people can tolerate goat milk products. “It won’t solve all your health problems,” she said, “but it can be a good part of a healthy lifestyle.”