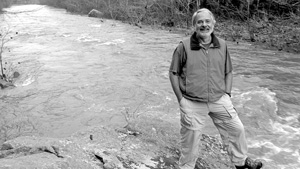 Steve Scarborough, a member of RCAG, has concerns about insufficient water sampling methods by TVA. Photo by Maureen Halsema.

Almost a year after the coal ash disaster at the TVA plant in Kingston, a citizens advisory group says they are unhappy with TVA’s information and water sampling procedures.

“This is a horrible economic and environmental situation that we are in,” said Steve Scarborough, Roane County Community Advisory Group (RCAG) spokesman and a veteran of conservation advisory groups.

“We are concerned about how they will clean it up, where the ash goes and how it goes through Roane County,” he said.
Among other issues, the RCAG thinks that even basic information from TVA is a problem.

“Samples have not been taken at high flows on the Emory River when the greatest contaminant loads would be present,” Scarborough said. “Water quality data is incomplete and does not give an accurate picture of heavy metal contaminant discharges, and we think understates them.”

RCAG serves several purposes for both Roane County community members and for the agencies involved to help deal with the cleanup of the “hazardous substances” that are found in coal ash.
Community advisory groups are part of EPA “Superfund” (CERCLA ) process, and need to be involved in the decision-making
process for waste-cleanup areas.

“We expressed our concerns with the lack of effective communication from TVA on a number of subjects,” Scarborough said. “As a result, TVA has made a renewed effort to get information to the public. Even though this is a work in progress and far from perfect, progress has certainly been made. “

RCAG has presented and addressed multiple problems that have impacted the community since the spill, such as traffic flow, relations with law enforcement in the Swan Pond community, plans for rerouting the train to ease traffic delays, and exposing inconsistencies in sampling methodology.

“The RCAG is also concerned about TVA as lead agency,” Scarborough said, “and would prefer that TVA be removed as lead agency due to failures such as water sampling irregularities and questions on air quality measurements as well.”