“A clean-up can either be done right or it can be a ticking time bomb,” California Senator Barbara Boxer cautioned TVA CEO Tom Kilgore during the Environment and Public Works committee’s oversight hearing on the recent coal ash spill at the Kingston Fossil Plant near Harriman, TN.
In response, Kilgore promised a “first-rate job” of cleaning up the affected area. “It is not a time when we hold our heads high, but it is a time when we will look our neighbors in the eye and say ‘We will stay on the job until it’s finished. We are going to do this and do it right,’” Kilgore told the committee members. 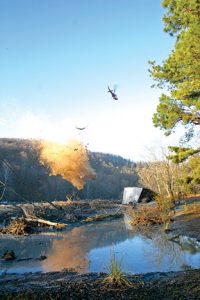 A helicoptor drops a load of hay and hydroseed onto the ash near Swan Pond Circle in an attempt to prevent the ash from becoming airborne. Both ash recovery and temporary storage areas will have to be constructed before the ash can be removed from the Watts Bar Lake area. Photo by Jamie Goodman

At the time of the hearing—held on January 8—TVA’s plans for cleanup were still largely unformed. They were in the process of seeding the ash with hydroseed and hay dropped from helicopters in an attempt to prevent the ash from becoming airborne. They knew that the next step would be dredging the river, but due to the possibility of deep-lying radioactive sediment—historic pollution discharged from the Oak Ridge nuclear facility upstream—their dredging plans had to be approved by the Watts Bar Interagency Working Group. According to a Knoxville News report, the working group unanimously approved the plan, and it now awaits approval by the Tennessee Department of Environment and Conservation (TDEC) and the U.S. Army Corps of Engineers.

TVA’s proposal involves dredging the ash from the river channel using hydraulic dredges. The proposal includes pumping the material through a pipe to the onsite sluice channel, allowing it to dry, and then moving it to a temporary storage location onsite.

Gil Francis, a TVA spokesperson indicated that TVA would not be able to begin dredging until “four to six weeks after the permitting process is complete.” Their plan estimates March 2 as an “early start” date. Even after the plan is approved, both an ash recovery and a temporary ash storage area must be constructed. There is no timeline for the completion of dredging at this time.

Until the dredging begins, coal ash is being retained by a 615-foot underwater rock weir built on the Emory River, just north of the existing plant intake skimmer wall. The weir will allow water to continue flowing and retain the ash at the bottom of the river channel.

Feelings on the speed or effectiveness of TVA’s cleanup plan are mixed among area residents. Travis Cantrell, who was living on one of the river’s inlets before the spill, expressed some skepticism about the plans for the cove TVA had outlined in their correspondence with him. “They’re going to come in here [and] remove all the trees … they’re going to remove all the waste out of here and pretty much come through, level it off, bring rock and sand in and sod it,” Cantrell informed us. With appeal of lakefront property gone, Cantrell says he will be relocating.

Cantrell’s neighbor, Nancy Hall, however, is more optimistic, and will be staying put. “We feel like TVA is going to do it,” she said. According to Hall, TVA has been “excellent” about keeping in touch with them since the spill and keeping them informed.

TVA Spokesman Francis could not officially verify Cantrell’s statements regarding TVA’s plans for the coves, as each step of the clean-up process must be reviewed according to National Environmental Policy Act (NEPA) standards. NEPA requires an Environmental Impact Assessment for all federal agency actions. According to Francis, anything beyond the Phase I dredging is a “plan that obviously hasn’t been made yet.”