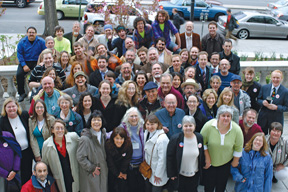 In mid-March, the Alliance for Appalachia will be sponsoring the fourth annual End Mountaintop Removal Week in Washington, a week of direct lobbying by Appalachian residents and others from across the United States. Participants get to join with other activists and impacted citizens, and receive the training to sit down with their lobbyists and tell them why passing the Clean Water Protection Act and ending mountaintop removal is of the utmost importance.

Steph Pistello, who travelled to last year’s Week in Washington, insists that it changed her life, explaining that “not only did I realize that it truly is ‘the people’s house’ and our voice and presence on the Hill CAN make a difference, but I gained incredible, meaningful friendships that will last a lifetime.”

Rep. Frank J. Pallone (D-NJ-06) and Rep. Dave Reichert (R-WA-08) have announced plans to introduce the CWPA into the House of Representatives in the 111th Congress. The CWPA would reverse a dangerous Bush administration ruling that allows toxic waste from mountaintop removal mining to be classified as “fill material” and thereby dumped directly into adjacent river valleys and headwater streams in Appalachia. The Environmental Protection Agency (EPA) has estimated that the dumping of waste from mountaintop removal has destroyed more than 1,200 miles of Appalachian streams.

In a letter to members of Congress urging other representatives to co-sponsor the bill, Reps. Pallone and Reichert said:
Our bill would amend the Water Pollution Control Act to clarify that “fill material” regulated under federal law cannot be waste material. It is simply inappropriate to allow the excess spoil from [mountaintop removal] mining to be dumped in mountain streams where it can pollute waterways, fill valleys, and in some cases, potentially endanger the lives of area residents. Please join us in supporting the Clean Water Protection Act to protect our waterways by prohibiting the dumping of mining fill into rivers and streams.

The grassroots movement to end mountaintop removal helped propel the CWPA to a record 153 bipartisan co-sponsors in the last congressional session. That number includes eight bipartisan representatives from states where mountaintop removal is currently taking place. The goal is to pass the bill during the 111th session.

This year – bolstered by a new administration and Congress – hundreds of citizens concerned about our mountains, waters, and Appalachian heritage are walking the halls of Congress in Washington, D.C. asking the House of Representatives to pass the CWPA. We hope you will join us by asking your congressional representative to cosponsor the bill.

To register for the fourth annual Week in Washington event March 14-18, 2009 or for more information, visit www.ilovemountains.org/action/wiw2009. Registration for Week in Washington is open now and continues through February 25, 2009. Scholarships are available on a limited basis; participants seeking scholarships must register no later than February 20.

For more information about the CWPA, email JW Randolph, Appalachian Voices’ Legislative Associate at jw@appvoices.org. For information about how to contact your representatives, visit www.house.gov or call the Congressional Switchboard at 202-224-3121.

On February 2, Georgia State House Rep. Mary Margaret Oliver (District 83) introduced The Appalachian Mountains Preservation Act (HB-276). The bill will phase out contracts from mountaintop removal mines to Georgia utilities over a five-year period.
The bill will also place a moratorium on the construction of new coal-fired power plants in the state of Georgia.

Appalachian Voices partnered with Georgians For Smart Energy to promote the bill in the Georgia legislature. Rep. Oliver hopes that the bill will create a much needed dialogue about energy consumption and generation on the state level, and believes that Georgia has the opportunity to lead the country in pursing responsible, clean, and renewable sources of energy.

Georgia is the number one consumer of mountaintop removal-mined coal in the nation.

If you are a Georgia resident, please contact your state representative and ask them to co-sponsor The Appalachian Mountains Preservation Act. You can find your state representative by visiting www.legis.state.ga.us.
North Carolina, which is second in consumption of mountaintop removal-mined coal behind Georgia, plans to introduce its own version of The Appalachian Mountains Preservation Act during the 2009 legislative session. The North Carolina version of the bill will phase out contracts with mountaintop removal mined coal in the state. Rep. Pricey Harrison (District 57) will be the lead sponsor of the bill.

For more information about The Appalachian Mountains Preservation Act, contact Austin Hall at 828-262-1500, or austin@appvoices.org