Story by Sarah Vig[caption id="attachment_27277" align="alignright" width="288" caption="Coal River Mountain as it is today. But for how long?"] 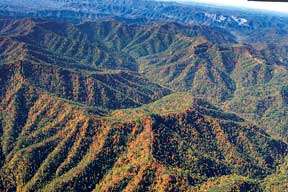 
Bulldozers are set to begin moving dirt on Coal River Mountain, and Massey Energy, with the permit granted to them by West Virginia’s Department of Environmental Protection, can begin blasting at any time.


The permit’s approval, which was announced in late November, was met with anger and disappointment from community members and opponents of mountaintop removal across Appalachia.


Research has shown that Coal River Mountain has enough wind potential to provide electricity for between 100,000 and 150,000 homes indefinitely, while creating approximately 50 well-paying, permanent jobs. A wind farm would also generate as much as 10 times more county revenue than the mountaintop removal operations would. More than 30 community members who stand to be impacted by the mining drafted a letter of resolution in support of the wind farm.


The Coal River Wind Project was awarded Co-Op America’s national award for “Building Economic Alternatives” in 2008, and has the potential to position the state of West Virginia at the forefront of the clean energy movement in the United States. “The blasting of Coal River Mountain will not only strip the range of its resources, its tributaries and forests, its history and meaning,” wrote author Jeff Biggers in a blog post on the day of the permit’s approval, “it will rob West Virginians of the possibility of creating long-lasting jobs and clean energy.”


“Residents fear that the onset of mining, even for this first phase, will result in the loss of an opportunity to diversify our local economy and protect our homes from the negative impacts of the Mountaintop Removal mining,” said Lorelei Scarbro of Rock Creek.


Opposition to the mining of Coal River Mountain goes beyond activists, environmentalists, and public intellectuals, however. 62 percent of West Virginian’s oppose West Virginia Governor Joe Manchin’s decision against “stopping Massey Energy from using mountaintop removal coal mining to level a section of Coal River Mountain that could have been used for a wind farm,” according to a survey conducted this fall by the Civil Society Institute and the Citizens Lead for Energy Action Now (CLEAN). In addition, 900 West


Virginians have signed a petition in support of the wind turbine, which has received a total of 9,800 signatures from people across the nation.