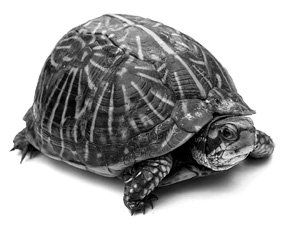 
He was probably on his way to the creek.


It had been a dry summer, and I heard him scratching down the hill, headed for water with speed and a sense of determination that seemed rare in a turtle. As I pulled out the camera and caught his indignant glare, I was reminded of what it was like to find a box turtle decades ago, and of childhood in an era of natural abundance that will never return.


I hadn’t seen one on that path in almost two years, and I recalled that the eastern woods used to be full of life. It was once very common to come across birds, snakes, deer, possums, and a host of other animals on an everyday walk through the woods.


Chasing down a blue racer snake, or pulling up sassafras, or hunting for mistletoe among the oak groves -- these were among the things kids would do on a


Usually we’d see half a dozen box turtles. They were way cool. We’d bring one home for a day, and invariably, we’d hear of the need to wash our hands. Today I realize this is good advice, given that box turtles carry salmonella.


Since they are omnivores, they seemed pretty happy with a fly and raw hamburger salad.


We would set them free the next day in the same spot where we caught them, which is the right thing to do. Box turtles have a strong homing instinct and like to stay within a few acres of where they grew up.


If box turtles are set free too far from where they were picked up, they will try to return home. Sometimes they never make it.


A Davidson College study published last year found a 60 percent mortality rate for turtles released away from their original ranges compared to turtles captured and released where they were found. Joy Hester, Stephen Price, and Michael Dorcas at Davidson College’s herpetology laboratory attached small radio transmitters to 20 box turtles – 10 resident to their area and 10 from miles away. All of the resident turtles lived during the year the transmitters were active. Only four of the non-resident turtle transmitters were still active at the end of the year.


“Relocated turtles had larger home ranges, moved greater average distances per day, and moved greater distances from their release points than did resident turtles,” the authors said. This made them more likely to encounter man-made threats like roadways, railroads, and pets, the scientists said.


Turtles apparently like each other, so the relocated turtles are probably looking for their homes rather than being forced out of another turtle’s area.


According to studies by the U.S. Forest Service, Eastern box turtles are not very territorial. A Tennessee study found that they ranged about 5 acres, while a study in Virginia found they ranged 19 acres.


Named terrapene carolina by Linnaeus in 1758, the Eastern box turtle was well known to Native Americans and European settlers. Their shells might be cleaned out and used for bowls or cups, and they were considered edible. But, they could be dangerous to eat if the turtles had been eating poisonous mushrooms.


Box turtles live 100 years or more, longer than nearly any other North American animal, but they reproduce slowly.


Their status in 1994 was “Near Threatened,” according to the Red List of the International Union of Conservation of Nature (IUCN). That is to say, they are in the upper half of North America’s 3,300 endangered or threatened species, but they are better off than many species.


Regulations about keeping box turtles vary from state to state – Virginia and North Carolina limit the number of box turtles one may keep at home (five in Virginia and two in North Carolina), but like any wild creature, they will not thrive in a home environment – fly and raw hamburger salad notwithstanding.


We seem to think of the mid 20th century as a simpler time, but that is only in relationship to our man-made artifacts.


Taking a photo, and then watching the box turtle scramble on down the hill, reminded me that the times weren’t so simple back then. Rather, our relationships with nature could be more complex at that time because, in part, there were so few other things that got in the way. Today, as we push back the boundaries of the natural world, we have to wonder how much we have lost of something powerful and important.