Energy by and for the people 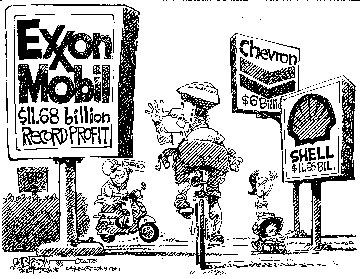 Public opinion polls are showing a serious problem with the debate over our future sources of energy: the American people strongly agree on solutions.


Well over 80 percent of Americans consistently agree on renewable energy and conservation. In poll after poll, people strongly approve of the idea of building a sustainable future for their children. They also want America to lead in the kinds of renewable energy technologies that will make this a better world.


Whatís the problem? In a democracy, when the public strongly agrees on something, public servants should be scrambling to make it so.


And yet, the utility industry and the government have managed to invert their priorities. Coal and nuclear power dominate their plans for our future. There are almost no serious efforts at conservation, and only tiny efforts focused on solar wind or hydro.


What does this enormous gap show? Is it a reflection on the state of our democracy, or the lack of leadership in government, or the lack of innovation in industry, or the potential force behind a consumer revolution?


Our vote goes to all of the above, but one thing stands out. The American people will insist on the right choice.


Pity the fools who try to stand in the way.


Winds of change on Coal River

As this issue of Appalachian Voice goes to press, Co-op America has announced that this year’s Building Economic Alternatives Award will go to the Coal River Mountain Wind Project.


The award recognizes the project’s “determination to harness economic action for a better world -- using the jobs created by a renewable energy project to save a mountain ecosystem and mountain communities.”


The award also highlights the difference between an emerging vision of a strong, healthy Appalachian economy and the devastation that the coal and oil industries would impose.


Given fuel prices at the pump and our deer-in-the-headlights federal energy policy, its clear that we need to lift our visions and our voices once again. It’s clear we need to create an energy policy as if people and the future mattered.


We’re not on unfamiliar ground. This happened in WWII , when American soldiers were so frequently called on to act independently. It happened in the Civil Rights movement, when Southerners longed for a future without hate.


And it is happening now, as we begin to envision a future for our children and grandchildren that doesnt depend on the ruthless and immoral devastation of God’s creation.


The nation is well served by efforts like the Coal River Wind Project. It has shown that independence of thought and spirit is THE renewable resource in America.