The Upper Watauga River just got a new friend.


Donna Marie Lisenby, an award-winning environmental advocate, began serving on the staff of Appalachian Voices as the first Upper Watauga Riverkeeper this June.

Lisenby will be a full-time public advocate for the entire watershed including the Watauga River, the Elk River, Roan Creek and Watauga Lake.


Her job with Appalachian Voices is to serve as the leading advocate for the health of the Watauga River watershed and provide a visible presence on the river as well as its tributaries.


In effect, she will speak for the river, its problems and potential solutions while ensuring enforcement and compliance with environmental laws. She will work as investigator, scientist, lawyer, and advocate, protecting the public’s right to


All Waterkeepers worldwide serve as the representative of the public’s interest in clean water and healthy fisheries by providing testimony, expert opinion and/or presentations at city, county, state and federal proceedings and meetings.


The Riverkeeper is responsible for organizing a diverse constituency of people in the upper Watauga River drainage, including water drinkers, swimmers, fishers, boaters, property owners, farmers and business owners for the purposes of 1) expanding the number of people who advocate for healthy rivers; 2) raising public awareness of River issues and; 3) providing training for citizen activists.

Lisenby will also review development activities, facilities that discharge wastewater and any other potential threat to water quality and quantity then actively seek solutions while facilitating public education about river issues. It is important for a Riverkeeper to establish and maintain relationships with local and state elected and appointed officials, especially local officials engaged in planning, zoning, enforcement, and other areas directly related to the health and well being of the river. In addition to partnership approaches, if necessary to protect the public’s right to clean water, a Riverkeeper will use litigation and administrative challenges against polluters and government in appropriate circumstances. Through the support and vision of Appalachian Voices and its members, Lisenby will protect the public’s water from polluters.


One of the many public services a Riverkeeper provides is to identify and respond to citizen complaints so consistently and diligently that the Riverkeeper becomes recognized by the community as the foremost investigator of water pollution problems. If you observe water pollution anywhere in the North Carolina or Tennessee portions of the Watauga Lake watershed, please call our toll-free pollution hotline at 1-877-277-8642.

Mercury pollution Is the first concern

Dealing with mercury from coal fired power plants is one of the most important issues on the Watauga River.


In 2007, the Tennessee Department of Environment and Conservation (TDEC) issued a fish consumption advisory for Watauga Lake for largemouth bass and channel catfish due to high levels of mercury. Both the EPA and the FDA have established a fish flesh limit of .3 parts per million for methylmercury, mercury’s most toxic form. Eating fish with methylmercury levels higher than .3 ppm is considered potentially detrimental to the health of humans, particularly children. At one sampling site in the Roan Creek embayment of Watauga Lake, samples of 15 largemouth bass contained an average of .59 ppm of methylmercury.


That is almost double the safe level.


The high level of contamination seems odd for such a pristine mountain lake, located far from pollution sources and bordered by the Cherokee National Forest, several state parks and wildlife management areas. Yet the U.S. has 1,100 coal-fired power plants that release more than 48 tons of mercury into the air every year, accounting for more than 40 percent of airborne mercury emissions in the nation.


Coal-fired electric power plants are the largest source of anthropogenic, or human-caused, mercury air emissions in the United States. Mercury is deposited onto the ground or directly into waterbodies as fall out from the air emissions of coal-fired power plants. It can be washed from the land and carried to rivers, streams, and lakes by stormwater. When elemental mercury lands in water, it is transformed to methylmercury, the most toxic form of mercury, by microorganisms found in water and sediment. Small aquatic organisms consume mercury as they feed, and then they are eaten by larger and larger animals, with the mercury accumulating at each step; this is called bioaccumulation. Fish that are higher in the food chain, such as largemouth bass have much higher mercury concentrations than fish that are lower on the food chain. Organic mercury concentrations can be more than 1,000 times greater in the fish than in the surrounding water. Humans become exposed when they eat fish that are contaminated with mercury.


High levels of mercury in developing fetuses and young children can irrevocably effect their neurological development leading to development delays and learning disabilities. Babies are exposed to mercury from their mothers’ blood in the womb, as well as from breast milk. Mercury poisoning can also cause lung, kidney, heart, and immune system damage. An estimated eight percent of women of childbearing age have unsafe levels of mercury and the leading mercury researcher at the United States Environmental Protection Agency estimates that 410,000 babies born each year in the U.S. have unsafe levels of mercury. Based on Centers for Disease Control data, the North Carolina Department of Health and Human Services recently estimated that “at least 13,677 children per year” are born in NC with blood mercury levels that place them at risk for lifelong learning disabilities, fine motor and attention deficits, and lowered IQ.


Just 1/70th of a teaspoon of mercury can contaminate a 25-acre lake. Partial testing of less than 60% of North Carolina waters by the Department of Environment and Natural Resources determined that 1000 miles of North Carolina rivers plus an additional 29,522 acres of freshwater lakes, reservoirs and impoundments are impaired for mercury. Mercury impaired more acres of water in North Carolina lakes than any other source including Chlorophyll a, turbidity, high pH, dioxin, nutrients, low pH and aquatic weeds.


Appalachian Voice will be keeping track of the Upper Watagua efforts in future issues, especially sedimentation, which another important problem. 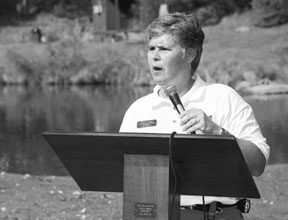 For the past 10 years, Lisenby served at the helm of the Catawba Riverkeeper Program and was recognized as “Charlotte’s Best Advocate” by Charlotte Magazine in May, 2000. She was also recognized as a “1999 Guardian of the Environment” by The Charlotte Observer, In addition, she was selected as a recipient of the Charlotte Coalition’s “Blue Thumb” award.


The Catawba Riverkeeper Program is also the only environmental organization to receive three Best of Charlotte Awards for “Best Effort to Improve the Environment” in 1999, 2000 and 2004. Other awards include the Mountain Island Lake Marine Commission’s Blue Fin Award for 2003, the Lake James Task Force Award for Outstanding and Distinguished Service in 2004, and the 2005 J. H. “Mac” McSwain Community Service Award for exemplary community service to the Lake Wateree Community.


In 2005, Ms. Lisenby was elected by her fellow Waterkeepers to serve as a board member of Waterkeeper Alliance.