The greening of a Cherokee school 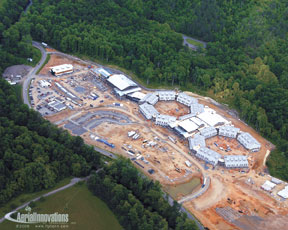 Seen from high above, the new school might remind you of the outline of the Big Dipper -- a short handle with two circles at the end. Zoom in, and you see the circles are two-story buildings ringing huge, one-acre courtyards, and the handle holds a stadium and athletic field. The rooflines slope, curve and swell like the surrounding mountains; landscaped walkways wind between stone-trimmed buildings; windows soar skyward at entrances.


When finished, the K-12 campus will be one of the largest “green” schools east of the Mississippi.


The Eastern Band of Cherokee Indians “are stewards of the land. We always have been. We all are,” says Dr. Carmaleta Monteith, school design coordinator for the tribe’s Central Schools Board. A native and a semi-retired school administrator, Monteith has helped the board negotiate the challenges of building a much-needed new school -- from its design to its cultural and environmental curriculum. “One of the most exciting parts, for me, is not just to save resources and protect the environment, but to teach the students about [green issues] while they’re experiencing it.”


The school features natural daylight -- whether from its expansive use of windows or its use of solar tunnels that bring light to interior rooms and gymnasiums. Certain public toilets will flush with water stored in two 30,000-gallon cisterns that will harvest rainwater off the roof. Lights will have sensors, so that if the natural light is sufficient, they turn off or dim correspondingly. Heating and cooling will come from a geothermal system of almost 300 wells that transfers the earth’s temperatures from the depths. Interior woodwork will feature the walnut, cherry, sycamore, white oak and other trees harvested onsite that totaled about 96,000 board feet. Landscaping will feature native plants, especially those important to Cherokee culture, such as river cane for basket-making, and traditional herbs and plants used for dye. The overall curriculum – from elementary to high-school grades – also features issues, traditions and activities important to the Cherokee, whether it’s stickball or the native language, Monteith emphasizes. Educating children about environmental

issues and preparing them for the hightech needs of the 21st century also figure large, she explains. “We want to train them for leadership roles,” Monteith says