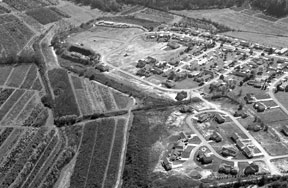 The story of development in Appalachia goes back to 1585, when Lt. Ralph Lane sent surveyors to explore from what would, one day, be Chesapeake Bay south to present-day North Carolina. In a letter back to England, the Elizabethan explorer wrote, “. . . we have discovered the main to bee the goodliest soile under the cope of heaven, so abounding with sweete trees, that bring such sundry rich and most pleasant gummes, grapes of such sweetnes, yet wild, as France, Spaine nor Italy hath no greater . . . . . it is the goodliest territorie of the world . . . for the soile is of a huge unknowen greatnesse . . . .”


Fast forward 423 years, and Lane’s “unknowen greatnesse” is being strangled by sprawl. U.S. housing growth is now “ubiquitous” and the sprawl once associated primarily with urban areas has become a dominant feature of the rural landscape, according to Housing Growth in the U.S. from 1940 - 2030, a study released in April of this year. Appalachia is also experiencing growth; expanding metropolitan areas and a swelling number of seasonal and retirement homes in non-metropolitan areas are fueling significant growth, in the Carolinas and Georgia in particular, the study said.


“The land’s dying from a thousand small cuts,” said Jamie Ross, producer of the four-part PBS series Appalachia, which will air nationally in spring 2009. The oral historian and filmmaker travelled extensively documenting the values and physical changes of the cultural landscape of Appalachia.

“We did spend at least eight years traveling from Alabama to New York State,” Ross said, “and even just along Hwy 81 it is astounding to see the subdivisions replacing silos outside of places like Abingdon and Lexington and Bristol – just damn depressing.”


Between 1982 and 1997, population in the South grew by 22.2 percent, the highest population growth in the U.S. by percentage. During that same period, urbanized land in the South grew by 59.6 percent, according to The Brookings Institution. That is a nearly three to one development to population ratio, and “that’s pretty much the case across the country,” said Ed McMahon, senior resident fellow of the Urban Land Institute in Washington D.C. “We call it ‘driving to qualify,’” he said. “You keep driving away from a city until you can qualify for a mortgage.


Some regions of Appalachia have even more intense development to population ratios. The Upstate region of South Carolina, for example, has experienced development growth that outpaced its population increases by five to one, according to a report issued in February by Clemson University. Land there is being developed at a rate of 90 acres a day. Brad Wyche, executive director of the Upstate Forever land trust, says his board will be promoting a one to one ratio of development to population growth.


Not only are Appalachian taxpayers losing some of their most picturesque scenery and farms that feed them locally, it may be costing them money as well. Ross calls new developments “a drain on the community tax base, with roads and schools and sewage.” Opponents of rural sprawl argue that counties regionally and nationally are losing tax dollars to pay for “cost of community services” for new development ñ water, sewer, emergency services, road maintenance and more. Cherokee County, Georgia, reported spending $1.59 on residential community services for every tax dollar raised, and Blount County, Tennessee reported spending $1.23, according to 2007 figures released by the American Farmland Trust. The median cost for U.S. counties surveyed to build infrastructure for new housing developments was $1.19 for every tax dollar raised. In contrast, working and open land cost 37 cents for every tax dollar raised.


While residents who cannot afford to keep developers out find themselves increasingly fenced off from old hunting grounds and childhood haunts, there is widespread mistrust for zoning regulations. Wyche tells about a couple who filled out a Greenville County planning commission survey. “At the bottom of the form this couple wrote: ‘We love the Blue Ridge area just as it is. We don’t want zoning. Please leave us alone.’ What we’re seeing in our area is that people are realizing that they can’t have it both ways. We are going to continue to grow. There is nothing we can do about that, the population is increasing, like it or not.”


“One of the policies we’ve been promoting is the notion of service boundaries,” said Wyche. “It’s not zoning; it’s not regulation. It’s saying, within this area we will be providing services and infrastructure: water, sewer, roads, widening roads, and schools. If you talk to any developer, they will tell you that if you have water, sewer, a good road and a good school, they are coming. We taxpayers are providing those services and that infrastructure. What a wonderful way to manage growth by being smart about where we are putting all these things.”


Farmland is proving particularly vulnerable to development pressures. America is losing two acres of farmland every minute. Farmland area equivalent to the size of Maryland was converted by development between 1992 and 1997, and the rate is accelerating. North Carolina’s farmland and natural lands are being developed at a rate of 277 acres per day. “North Carolina is tied for the lead in number of farms lost in 2006,” said Gerry Cohn, Southeast states director for the American Farmland Trust. “It’s in the top three for number of acres of prime farmland lost, your best soils.” Of states losing the most farmland between 1992 and 1997, Georgia was third, North Carolina was fourth, and nine of the thirteen states that comprise Appalachia

were in the top twenty.


“That’s the one issue across the region. Development is happening without any seeming consideration or attention to the capacity of the land and how many wells it can sustain,” Ross said. “A farmer has to consider the future, what the land can sustain next year. A developer just has to dig a well, and who cares if it goes dry in three months?”


“On net, the people who are coming into Appalachia have less education, lower job status, and less income. In some ways Appalachia is becoming an amenity region for the poor,” said Prof. Phillip Obermiller, editor of Appalachia Counts: the Region in the 2000 Census, a special edition of the Journal of Appalachian Studies compiled in 2004. “If there’s a loss of affordable land and housing in the market that denies people shelter, Appalachia is going to be in very dire straits. If many Appalachians can no longer afford to buy the house down the street or the farm next door, and as newcomers with low incomes seek refuge in the region, it’s going to impact them as well. What we’re talking about here is a double whammy.” The very people who could afford to buy the farm next door in central and northern Appalachia, he says, are moving away, while the older populations are aging in place.

“There’s an aging landowner population, which makes challenges for who’s going to farm in the next generation and how these farms will be passed along intact,” Cohn said. “Aging landowners are getting offered more money for their land than they could ever imagine, and it’s a real opportunity for retirement. I want to put myself in their shoes. Farmers don’t have 401(k)’s and they haven’t accumulated a lot of cash. “


“Farmers call it ‘growing houses,’” said Ross. “They don’t want their land to go to growing houses,” Ross said. “There’s an old saying: you can milk a cow every day but you can eat hamburger only once. That’s the trouble with building houses.”


PRICED OUT OF THEIR COMMUNITIES


Cassie Robinson’s story is perhaps a case in point. She was unable to buy her great-grandfather’s house in Mars Hill, North Carolina when it became available. Her father helped build the house; her grandmother dug out the dirt basement with a dishpan. “My aunt and uncle hit some hard times; it came up for sale,” she said. “A woman from Florida was more than willing to pay more than twice what the house was worth. The blood and sweat and labor of my dad and my uncles ñ that had such a value to me. Being a young professional, I couldn’t afford to buy it.”


She has since moved to Harlan County, Kentucky, where she is assistant director of Pine Mountain Settlement School. “That was a hard lesson,” she said, “on not being entitled to participate in your culture at the level that people moving in could.”

“You see so much of that happen. You see people being priced out of their communities.”