By Sarah Vig[caption id="attachment_27259" align="alignright" width="216" caption="The Fraser fir grows naturally only in the southern Appalachians. The cool temperatures and higher rainfall in the High Country help the trees keep their needles throughout the Christmas season. The trees pictured here are part of a small farm near the New River in Boone, NC. (Photo by Sarah Vig)"] 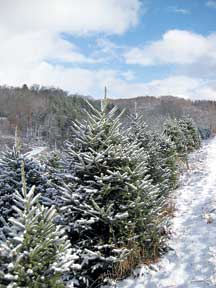 
For most people, the quest for the perfect Christmas is not so different today than it was 150 years ago. People have been cutting their own Christmas trees since the 1850s. At the time, trees were chosen from forest, not farms.


The first Christmas tree farm began in 1901 in New Jersey with 25,000 Norway spruce. Since then, Christmas trees farming has become an agricultural mainstay and farming techniques have evolved.


For instance, many of today’s tree farms are using far less pesticides and herbicides thanks to the development of Integrated Pest Management (IPM) methods, which eliminate blanket spraying in favor of “sparing, selective and intelligent use of chemicals” application, as author and environmentalist Rachel Carson suggested in a 1963 article related to the famed 1962 book, Silent Spring.


IPM combines biological, cultural, and chemical tools in order to minimize economic, health, and environmental risks. The goal of IPM is not to elimate all pests, but rather to maintain pest populations at less than damaging numbers.


Pests are controlled biologically by “conserving the native predators that are already present in every Christmas tree field,” according to a IPM guide distributed by NCCE. Ground cover management, a “cultural” practice essential to IPM for Christmas tree growers, uses lower than labeled rates of herbicide to stunt rather than kill weeds (4 to 8 ounces per acre as compared to the labeled rate of 32 to 160 ounces). Maintaining a low-growing ground cover provides habitat for natural predators and other wildlife without compromising the health of the trees. It also helps prevent erosion.


The decrease in pesticide and herbicide spraying due to IPM in North Carolina Christmas tree farms can be seen in the results of three pest management control surveys conducted by NCSU and the extension service between 1995 and 2007. For example, Di-Syston 15G, a pesticide used to control aphids and spider mites, was used to treat 64.6 percent of total acreage in 1994, which dropped to 49.6 percent in 2000, and 31.9 percent in 2006.


Environmental concerns related to Christmas tree farming persist. According to a study done by Dr. Jill Sidebottom of ASU, an estimated “4.1 pounds of active ingredient of insecticides/miticides are applied per acre per year in Christmas trees.” Most of these materials are toxic to aquatic fauna.


And less than half of the 25,000 total acreage dedicated to Christmas tree farming in North Carolina uses IPM. The increased amount of time farmers must dedicate to scouting for pests, as well as the detailed knowledge of pests’ life cycles, hatching times, and vulnerable periods may serve as a deterrent for some farmers.

Drought is another new concern for Christmas tree farmers.


“Higher temperature [as a result of climate change] is expected to increase the frequency and intensity of droughts in the state,” according to a recent study conducted by the Center for Integrative Environmental Research (CIER) at the University of Maryland. The National Drought Mitigation Center commented that in 2007, the epicenter of droughts for the whole of United States had shifted from the Midwest to the Southeast with North Carolina being among the states experiencing the driest year in the last century.


Numbers of pests that thrive in warm climates, such as the Balsam Wooly Adelgid, will also increase, CIER’s study predicts.


The impact of the past year’s drought is noticeable in the offerings at many regional Christmas tree farms. “We don’t have any of the big trees here,” a farm workers from What Fir! Christmas tree farm explains with some apology as he shows the graduated pricing by height on the PVC “pricing pole.” He had stopped short at

6 feet, although the marks on the pole go up to 9.


After two consecutive years of successful sales during the Christmas season and drought during the growing season, the number of large trees to harvest each year has diminished.


The combination of these two factors led Watauga county’s What Fir! Christmas tree farm to a decision to diversify their offerings beyond just choose and cut. This year is the farm’s first year of a partnership with Apple Hill Farm in Banner Elk. In addition to a corral full of pre-cut trees and a barn full of fresh wreaths, Apple Hill offers the additional attractions of hot cider and cookies, a small gift shop, plus llamas, donkeys, chickens, horses, and a few friendly canines to round out the crowd.


Yet, water shortage is not the only climate change-related threat that growers face in the coming years. Numbers of pests that thrive in warm climates, such as the Balsam Wooly Adelgid, will also increase, CIER’s study predicts.

With these growing issues in sight, more than creative agritourism may be in order to keep the Christmas tree industry healthy in North Carolina.

What should you do with your Christmas tree when the Christmas season ends?

One of the benefits of live trees is that they don’t end up in landfill. Most counties offer “recycling” for Christmas trees at their central solid waste facility. Usually, the tree will be ground into mulch, which is then distributed (most of the time for free – heads up, gardeners!) at the site. Some counties will only offer this service for a limited time in January, though many provide mulching services year round. In larger, metropolitan areas, there are often curbside pick-up programs, but outside of those areas, individuals are responsible for transporting the trees to the solid waste facilities themselves.


Another option is to sink the tree in a pond, where it serves as a refuge for fish. If you choose this method of disposal, however, it is especially important to know if your tree was recently sprayed with pesticides such as Di-Syston 15G, as many are extremely toxic to fish and other aquatic life.
Categories: 2008 - Issue 7 (December) | The Appalachian Voice