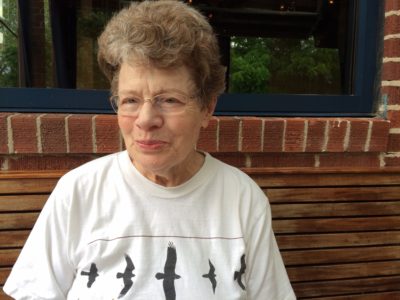 There’s no doubt in Vesta Jean Lenhart’s mind that she inherited her desire to preserve mountains from the destruction she saw as a child.

“Early on as a small child, I witnessed the devastating effects of coal on the people and the land,” says Vesta Jean.

Vesta Jean grew up on a farm in the 1930s with her parents and two older siblings in Lenarue, a coal town in Harlan County, Ky. Her father, Albert Morris, was a logger for the coal mines.

“My parents embodied the mountaineer spirit,” says Vesta Jean, “I have a lot of love and admiration for them because they preserved the Lenarue valley, which kept coal from being dumped on the land, for many, many decades.”

In the early 1970s, Albert died tragically after being hit by a coal train that failed to blow its horn on a curve. Vesta Jean’s mother, Laura, continued to protect their land from development until the late 1980s, when the Kentucky Department of Transportation condemned the area to construct a bridge for State Route 421.

“To the family that was a rather disastrous thing,” says Vesta Jean. “But I’ve come to accept it and in some ways, the bridge may have saved the valley. It will never be developed in another way.”

“I feel that coal has desecrated the land (in Kentucky),” says Vesta Jean. “If you go back there now, you will see the devastation. Those mountains are pretty much gone from mountaintop removal. Most of the young people have left and the ones that are left, the miners, have been broken down. Coal mining is on its way out and that is what has kept the area alive. A lot of the people are dependent on what miners get after they’re retired.”

Vesta Jean attended Cumberland College, which is now the University of the Cumberlands in Williamsburg, Ky. Shortly after, she moved to Washington, D.C., and worked for the Federal Bureau of Investigations as a typist. In D.C., she met her husband Donald, who also worked for the government.

Vesta Jean and Donald returned to Harlan County. There Vesta Jean taught for two years at the local high school before they moved to Maryland, where Vesta Jean went on to have a 35-year career in both elementary and secondary schools and raise a daughter.

In 1988, Vesta Jean and Donald retired to the base of Stone Mountain outside of Hendersonville, N.C. Donald passed away in 2015, and Vesta Jean preserves the acreage they shared and cares for her two rescue dogs, one of whom is named Moonshine in honor of where she grew up.

“I really am drawn to the preservation of the environment,” says Vesta Jean. “I think what is happening in the country right now is that we’ve kind of lost our way. So I hope that I can do my part to preserve.”

Vesta Jean is hopeful that the mountain region will recover from the devastation of mountaintop removal coal mining through assistance for affected families and the development of sustainable industries. Always the educator, Vesta Jean’s bumper sticker proclaims: “Topless Mountains are Obscene.”

“When I go into Hendersonville, I have had people stop me and ask what it means,” she says. “There’s a lot of people out there that have no idea of what has happened to the mountains.”

To celebrate Vesta Jean’s 90th birthday in August, friends and family contributed to Appalachian Voices in her honor.