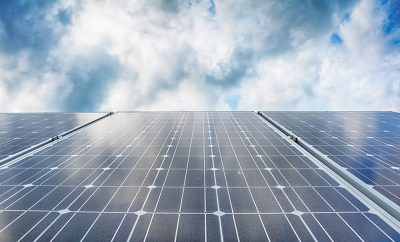 Installing rooftop solar can be a great way for homeowners to save money on their electric bills and help the environment. But putting up a solar array isn’t feasible for everyone. That’s where shared solar, also known as community solar, comes in.

Instead of installing an array on top of or near a house or business, shared solar allows anyone to invest in a small-scale solar farm providing locally sourced renewable power. This allows people who don’t own their home or building, have a shaded building, or who don’t plan to reside in the same place for a long time to “subscribe” to credits from a solar facility located elsewhere. Solar subscribers then receive a credit on their monthly electricity bill for the energy produced by their portion of the array.

Dan Hunnicutt, a project developer with solar contractor NCI, states that shared solar offers several advantages over individual rooftop arrays. Aside from being more cost-effective in installation and maintenance costs, a community array can also be used by apartment residents.

“With many homes or apartments with multifamily situations, there’s either not sufficient room or the tenant doesn’t have privileges to put in a solar array,” says Hunnicutt. “So this allows the homeowner [or tenant] to gain the advantage of the virtual array without having to necessarily have some of the issues that come with owning your own array, especially the upfront cost.”

Additionally, Hunnicutt states that some homes might not be suitable for a rooftop array.

“There could be too much shade, or it doesn’t have a good southern-facing roof space, or the roofing itself or the structure itself may not be well-suited to solar,” he says.

Shared Solar in the Commonwealth

Shared solar is complicated in Virginia. In fact, it will only become legal for customers of investor-owned utilities to have shared solar when an application period opens on July 1. The change stems from a spring 2020 state law instructing the State Corporation Commission to set up a shared solar program for Dominion Energy customers and for some Old Dominion Power ratepayers. 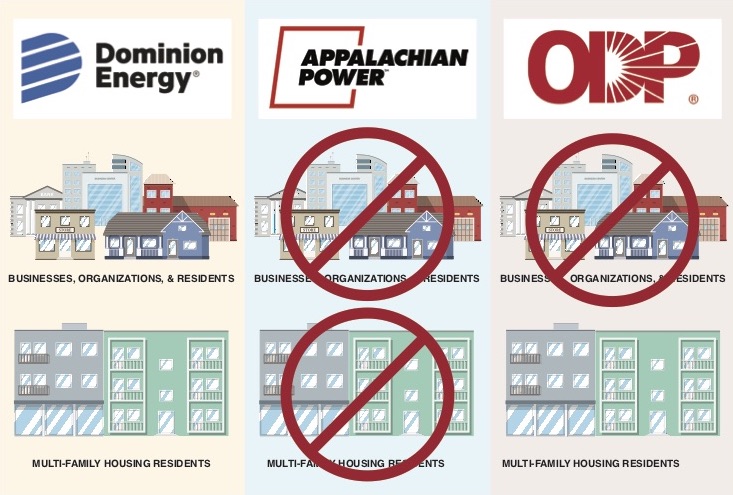 All customers of Dominion Energy and some with Old Dominion Power are able to apply for shared solar starting July 1. Ratepayers with Appalachian Power, however, were left out of the 2020 state law establishing the program. Graphic by Jimmy Davidson

But this legislation does not cover everyone in the commonwealth. Appalachian Power, which provides electricity to much of Southwest Virginia, still disallows shared solar installments. For Old Dominion Power customers, only those who live in multi-family housing are eligible for shared solar, which leaves out businesses, organizations and residents of single-family homes. Due to this, there are currently zero shared solar installments in Southwest Virginia, according to Karla Loeb, chief policy and development officer with solar installation company Sigora Solar.

Electric cooperatives do have the option on a case-by-case basis to enter into a shared solar project in Virginia, and several have so far.

Loeb states that Appalachian Power and other investor-owned utilities have been hostile to any type of solar development other than huge solar farms owned by the utility. These utilities have also opposed power purchase agreements, a financial arrangement in which a solar developer pays for a solar installation on the customer’s property and sells the power to the resident for a predetermined amount of time. This allows the customer to avoid the high upfront cost of solar.

“Since time immemorial, [investor-owned utilities] have advanced policies at every turn that both undermine residential power purchase agreements and community solar and consistently and continually try to get carve-outs so that they do not have to participate in those programs, which ultimately hurts their ratepayers,” says Loeb.

Dan Hunnicutt states that many utilities in Virginia that weren’t included under the 2020 shared solar pilot program are trying to prevent the program from being expanded to their ratepayers.

“They’re fighting the new program because they see it as a potential cannibalization of existing clients,” he says. “So that’s why they want to tack on heavy fees associated with it.”

Loeb adds that ratepayers would stand to benefit the most from shared solar programs and other solar programs because they would create jobs and generate tax benefits. Distributed solar installations — solar energy that is produced close to where it will be used — made up more than half of industry employment in 2020, according to the trade group Solar Energy Industries Association.

Loeb states that it’s especially important for Southwest Virginia to have access to the same types of solar programs offered to other parts of the commonwealth.

“Southwestern Virginia has been the economic engine of Virginia for its entire history,” says Loeb. “And the idea that a lot of that industry has left and there is a need for a new economy there, but the policies are not aligned to facilitate that progress, it’s kind of the root as to why it’s important. Everybody should have equitable economic opportunity in the commonwealth, and they currently don’t.”