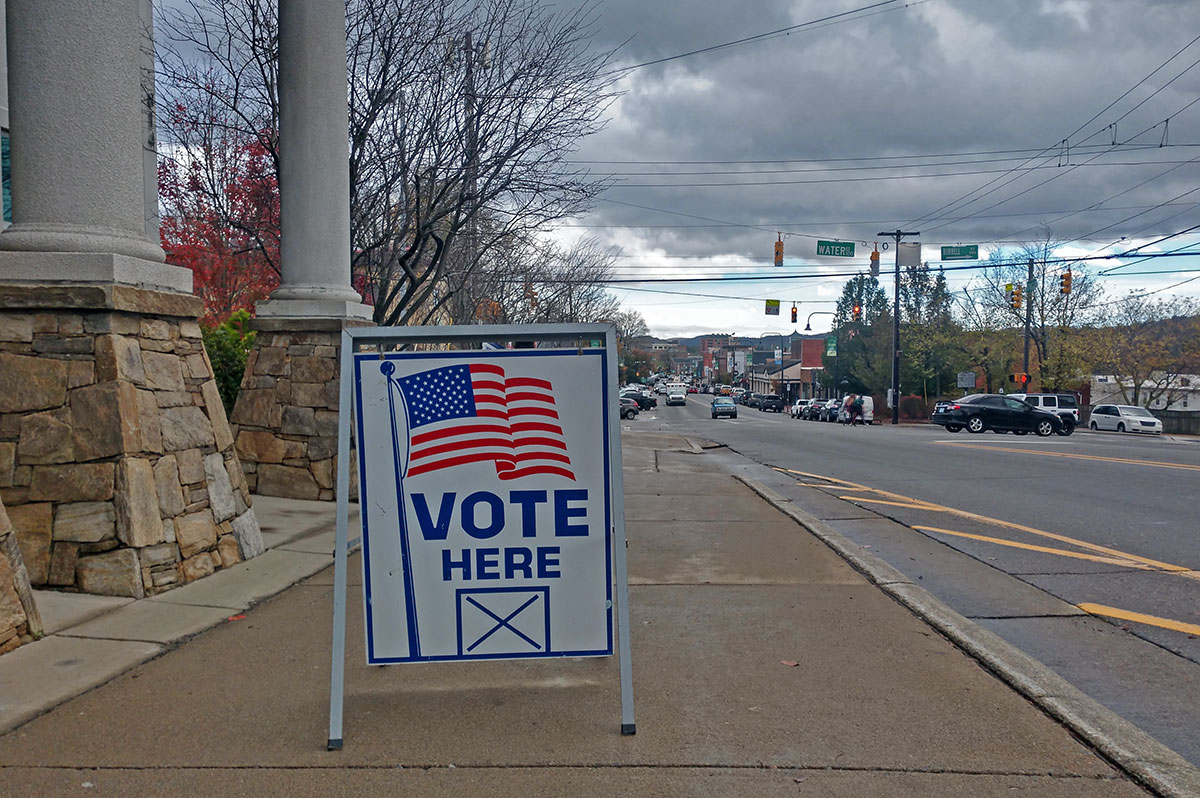 Counties across Appalachia are seeing high turnout during the early voting period. Photo by Molly Moore

There seems little question that the 2020 general election is the most challenging to run in American history. Early voting suggests a massive, perhaps unprecedented turnout is underway — even while a global pandemic makes in-person voting potentially dangerous for millions of voters and poll workers.


Across Appalachia, those responsible for running the elections appear to be rising to the challenge.

Don Blevins, county clerk for Fayette County, Kentucky, says the pandemic has been “a perfect storm” for his office — which handles deeds, mortgages and vehicle registrations in the county in addition to elections.

“Everyone has lost jobs, but people are buying cars,” he says. “They’re refinancing mortgages and buying homes. Staff in some counties are working overtime to keep up with the flow. They’re struggling to keep the doors open and do their normal jobs.”

During the May primary, when county offices were shut down, Blevins was able to use non-elections staff to do some election-related work — stuffing ballots into envelopes, for instance — but those workers are now busy doing their own jobs.

COVID-19 has weighed heavy on his mind through all the preparations and the beginning of early voting. “From day one, my greatest fear has been one of my employees getting sick and dying,” he says. “That’s terrifying. We’re taking every step we can to prevent it from happening.”

Keeping voters safe, of course, is also a priority. Several states have changed their systems to allow anyone to participate in absentee early voting — either by mail, drop-off or in-person.

Blevins and other election managers across the region during early in-person voting are taking many of the same precautions: disinfecting surfaces between voters, maintaining social distancing in voting lines, putting up plexiglass partitions, requiring masks, making gloves available, keeping doors at voting locations open for ventilation and using disposable pens.

“We’ve been sanitizing everything,” says Sue Greer, administrator of elections for Hancock County, Tennessee. “It’s made it a very stressful election, trying to keep everyone safe and from getting sick, not just workers.”

“Ensuring the safety of everyone and taking the proper precautions with such a mass of people coming through has been the biggest challenge,” says Kim Welborn, elections director of McDowell County, North Carolina. “We feel like we’ve done what we’ve needed to do.”

Turnout in McDowell County has been incredibly high. “Absentee voting by mail is 10 times what we saw in 2016,” Welborn says. “Turnout is higher than I’ve seen it in my 25 years here. This is the way every election should be.”

Higher turnout is also the case in Staunton, Virginia. “With no-excuses absentee voting in Virginia for the first time, we’re already at 39 percent of eligible voters having turned in ballots,” says Molly Goldsmith, Staunton’s registrar. “By the end of [early voting] Saturday, we’re hoping to hit 50 percent.”

About two-thirds of that voting has been in-person.

In Kentucky, Blevins would like to be seeing even more early voting, and fears that crowds could strain the system on Election Day. “We have the capacity to handle the turnout if everyone will spread out over the three-week early voting period and if we don’t backload it to Election Day,” he says. “If that happens, you’ll see really long lines and I’ll be accused of suppressing the vote.”

With so many people voting by mail for the first time, there have been concerns that some voters wouldn’t follow the instructions correctly, resulting in spoiled ballots, but elections officials report that hasn’t been a big problem. Most states have procedures to notify voters of issues so they can be fixed.

Kentucky relaxed some strict rules that might invalidate ballots over common errors, according to Blevins. Ballots that do get rejected trigger a letter to the voter explaining how to fix the ballot. As of Oct. 20, Blevins’ office had processed 48,000 mail-in ballots with 122 initially rejected, about half for signature issues.

The main concern may be ballots not getting to registrars in time to be counted. The U.S. Postal Service states that voters should mail ballots before Election Day and at least one week prior to your state’s deadline for receiving mail-in ballots. Those deadlines vary by state, but at this late date, voters who haven’t mailed their ballots in should check local and state guidelines to see if they can either deliver them by hand or leave them in drop-off boxes that many states are providing.

Even if you requested a mail-in ballot, it may still be possible to vote in-person, but the procedures for that vary by state. You can find nonpartisan information about absentee, mail-in and in-person voting for your state at the Appalachian Voices 2020 voter information page or at Vote.org. Appalachian Voices is the nonprofit organization that produces this publication. 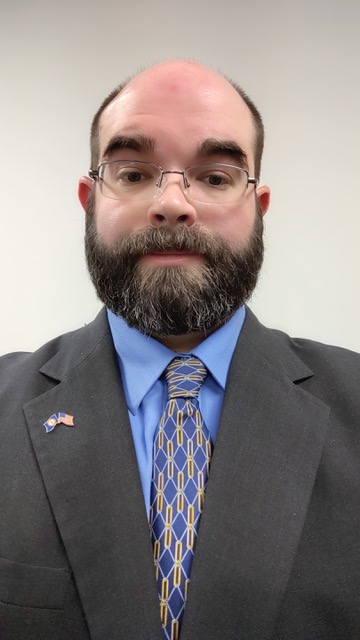 John Holst of Pulaski County, Virginia, is volunteering as a poll worker for the first time in the 2020 general election. Photo provided

There has been a lot of concern about poll workers during the pandemic, since they tend to be older retirees. When former President Barack Obama recently suggested that volunteering as a poll worker was a great way to get involved in the election, it was an “aha!” moment for John Holst, a 40-year-old who lives in Pulaski County, Virginia.

“I’d been trying to figure out how I could do more than what I’ve been doing to help with the election with all the controversy about the Postal Service and questions about integrity,” he says. “I want to do my part to make sure we have a fair, honorable and trustworthy election.”

The poll worker training he took was reassuring in many ways. “It sounds like county election officials have taken a lot of steps to ensure the election will be a good one, at least here,” Holst says.

In addition, lack of poll workers does not seem to be an issue. “In my county training session three weeks ago, about half were first-timers,” he says. “I think they’ve got enough people to fully staff the precincts, and that’s because there’s so many new people.”

Holst is bracing for a long day. The shift runs from 5 a.m. to 9 p.m. There won’t be the usual potluck throughout the day. “They told us to bring our own meals and beverages,” he says.

Though he’s younger than the average poll worker in a typical year, volunteering isn’t without risks, especially since he has some risk factors for COVID-19 if he should get infected.

“I’ve got asthma, which is a risk factor,” he says. “I also have hypertension and Type II diabetes as a result of some weight gain from a previous medical issue. But I’ve lost a lot of weight and everything is well managed with medication. It’s still risky for me, but I feel as comfortable as I can be with it.”

There’s one more sacrifice Holst is going to make in the name of safety: He’s going to shave his beard for the first time in nearly 20 years. “I want to make sure I can get as good a seal on the mask as possible,” he says.

Election officials reached for this story think results should come in the evening of Election Day fairly normally for their municipalities — though some states allow ballots that arrive up to nine days after Election Day to be counted as long as they are postmarked by Nov. 3.

“We should be able to publish results for the ballots we receive by Tuesday — in-person, early voting and mail-in processing — by midnight that night,” said Blevins, the Kentucky county clerk. “We can accept ballots up to Nov. 7, but we should have 80 or 90 percent of results on Tuesday night. It will give the normal feel of counties reporting.”

Welborn, the elections director in McDowell County, North Carolina, also believes her county will have most of its results available within hours of the polls closing. Absentee ballots are being tabulated as they come in, though they won’t be run through the system until after the polls close.

Virginia mail-in votes also have to be in by the Friday after the election, and postmarked by Election Day, according to Staunton’s Goldsmith.

Holst has a lot of confidence in the integrity of the election — at least in Pulaski County. “From what I’ve gathered from talking to registrars in person, they are doing everything in their power to make sure the integrity of what they report is as good as it ever has been or can be,” he says.

“My dad always imparted a lesson to me that his father said to him: Do what you need to do to be a good citizen,” Holst says. “Me and my dad’s politics vastly differ now, but when I mentioned what I was doing, he said, ‘your grandfather would be proud of you for doing your part.’”