Beginning of the End of North Carolina’s Coal Ash Crisis 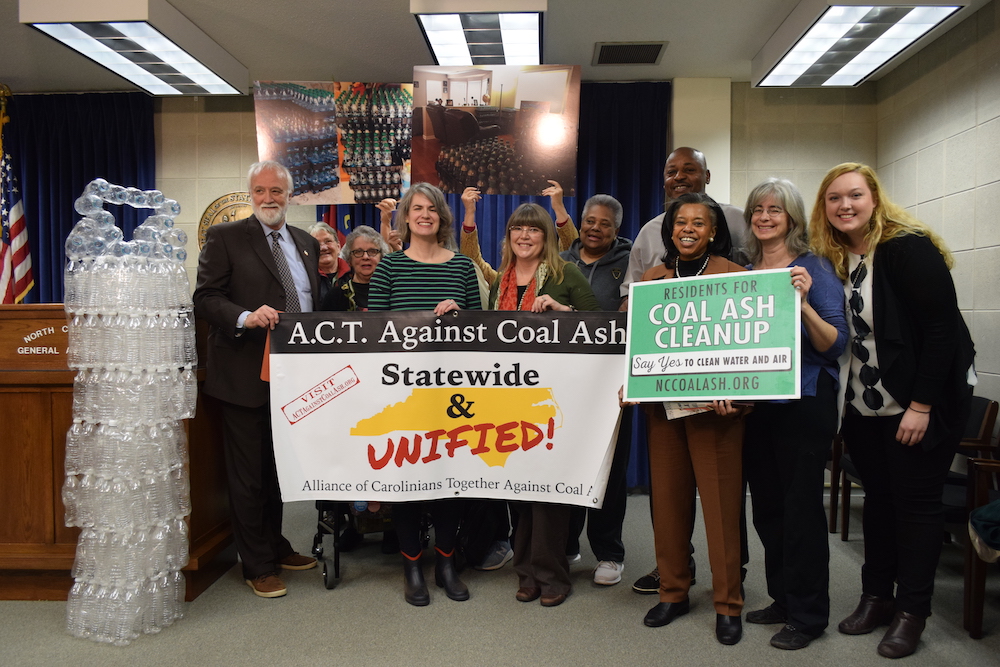 The ACT Against Coal Ash coalition held a press conference in 2018 to call attention to residents’ 1,000th day of living on bottled water. Photo by Kevin Ridder

On Jan. 2, North Carolina announced a historic settlement with one of the state’s most powerful corporations and polluters, Duke Energy. The settlement requires Duke to move nearly 80 million tons of toxic coal ash at six of its power plants to properly lined landfills onsite or recycle it.

The announcement brings to a close years of struggle and endurance by citizens from across the state who demanded full redress of the coal ash crisis that had gripped their communities. It was also a rare moment when those fighting for environmental justice can mark a definitive victory. Appalachian Voices, the nonprofit advocacy organization that publishes this newspaper, was involved throughout the fight — reaching out to and standing with communities, pushing regulators and politicians to do more, testing drinking water wells and surface waters, and participating in the multi-prong legal fight led by the nonprofit Southern Environmental Law Center. 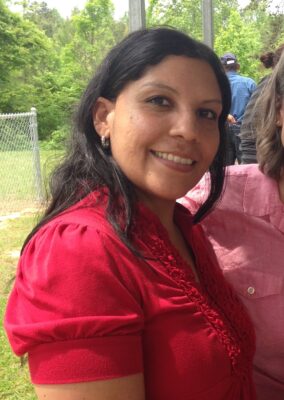 Danielle Bailey-Lash lived near Duke Energy’s Belews Creek power plant and coal ash ponds. Diagnosed with brain cancer at the age of 35, she passed away on Nov. 30, 2019. Her fellow activists honored her life, along with other community leaders lost during the struggle. Photo: Appalachian Voices

In January, more than 40 community members and activists, including several Appalachian Voices staff members, joined in Walnut Cove, N.C., for a celebration of the victory. But it was also an occasion of sorrow for the many community leaders lost during the struggle — including Danielle Bailey-Lash, who lived near one of the largest coal ash ponds in the state, at Duke’s Belews Creek power plant in Stokes County. A determined community advocate who fiercely loved her family, Bailey-Lash died of brain cancer in late November.

In February 2014, 39,000 tons of coal ash spilled into the Dan River when a drainage pipe collapsed at a shuttered power plant owned by Duke Energy. Some view that event as the start of the coal ash crisis in North Carolina, but in fact, communities near the utility’s coal plants had been voicing their concerns for a long time. Scientists found toxic elements like arsenic and hexavalent chromium in coal ash, and a lawsuit had already been filed asserting that coal ash ponds at all 14 of Duke’s power plants in North Carolina were leaking.

Appalachian Voices staff had been connecting with communities around the larger of these sites, particularly in Walnut Cove near Duke’s Belews Creek power plant, and in Belmont near the G.G. Allen plant. The aim was to ensure residents had access to complete information about coal ash, not just information provided by Duke Energy or state officials.

The communities began forming local groups to reach out to more neighbors, and asking officials questions about the threats. After the Dan River spill, residents of Walnut Cove, Belmont, and many other communities across the state rose up to demand that the legislature, state agencies and Duke Energy resolve the coal ash crisis. Within months, they had gathered 9,000 signatures on a petition demanding that Duke take full financial responsibility for cleaning up the Dan River spill, and that it excavate coal ash from leaky, unlined pits to dry, lined landfills away from water bodies.

Community voices kept intense public focus on the crisis long after the spill. The close connection between the utility and state regulators (under the administration of then-Gov. Pat McCrory, who had previously worked for 29 years at Duke Energy) came to light in a torrent of state and national media reports. The U.S. Attorney’s office launched a criminal investigation and a year later, in February 2015, reached a plea deal with Duke for $102 million for violations of the federal Clean Water Act.

Under intense pressure from citizens, the N.C. state legislature passed the Coal Ash Management Act in 2014, setting a framework for cleaning up of Duke’s 30-plus coal ash pits around the state by 2029. The Dan River site was among the first on the priority list and was scheduled to be closed by 2019.

But over the next several years, the N.C. Department of Environmental Quality’s proposed rules consistently fell short as the agency tried to advance a closure method known as “cap-in-place” — essentially throwing a massive plastic sheet over the unlined pits, which does not prevent toxins from leaching into drinking water. The agency also continually shifted its priorities for cleanup.

In the state legislature, lawmakers tried to weaken the 2014 law while Duke Energy’s lawyers fended off multiple lawsuits and lobbied for favorable coal ash legislation. 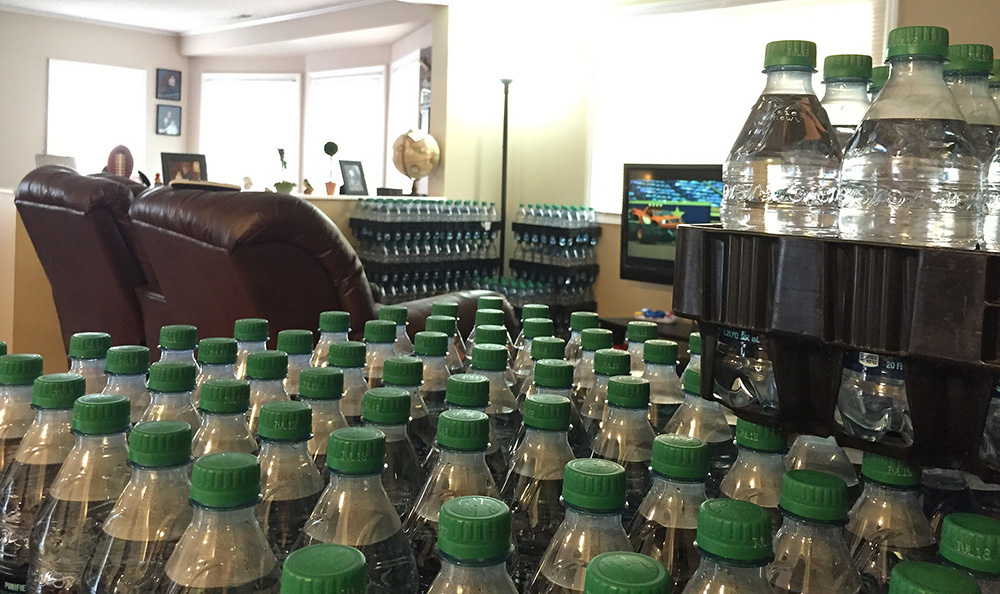 Meanwhile, hundreds of families near Duke’s coal plants were using bottled water for drinking, washing, cooking and cleaning, having been told by state officials their well water was unsafe. In one of the more stunning events of the saga, the state epidemiologist abruptly resigned in 2016, accusing the McCrory administration of misleading the public about well water safety advisories. By January 2018, four years after the Dan River spill, many families marked their 1,000th day of living on bottled water, and they once again demanded full cleanup of coal ash sites.

Time after time, citizens showed up at NCDEQ public hearings, refusing to accept half-measures or excuses. They spent hours studying the proposed rules, talking with each other and with experts to understand the implications, educating others and organizing their communities. They held rallies outside Duke’s corporate headquarters and sent masses of postcards to the governor. They talked with the press, with researchers and scientists and lawyers. They made allies with the NAACP’s Rev. William Barber, who helped amplify their message in the state capital during his “Moral Mondays” events.

In 2015, Appalachian Voices helped bring together North Carolina local groups and community leaders for a conversation. From that formed the Alliance of Citizens Together Against Coal Ash, a statewide coalition to unify their voices into a more powerful force on the issue.

As late as 2019, when the state was still pushing “cap-in-place” as an acceptable resolution at several coal ash sites, ACT Against Coal Ash refused to accept it. They turned out dozens of people to vigorously reject NCDEQ’s plans at yet another round of public hearings.

On April 1, 2019, communities across the state were rewarded with the news that the NCDEQ was ordering Duke to excavate all six of its North Carolina coal ash ponds that did not yet have closure orders in place.

“This decision does not come down to a matter of cost,” said Caroline Armijo with Residents for Coal Ash Cleanup in Belews Creek. “It comes down to compassion and respect for the lives of the people who love this state and their homes.”

Duke Energy appealed the order, but the Southern Environmental Law Center intervened in the case on behalf of seven organizations, including Appalachian Voices. And on Jan. 2 of this year, the state announced a settlement that definitively requires Duke to excavate its ash ponds. The vast majority of the coal ash currently in unlined pits will be put in lined landfills on Duke Energy property, some will be recycled into building materials, and a small amount will remain at the Marshall and Roxboro sites with heightened protections and monitoring.

And so, after participating in countless community meetings and public hearings, after contending with life on bottled water, after extensive research and litigation, after speaking with the media, legislators and neighbors — after all this and more, communities across the state and their supporters began 2020 in celebration.

These “accidental activists” are proof of Margaret Mead’s maxim: “Never doubt that a small group of thoughtful, committed citizens can change the world. Indeed, it’s the only thing that ever has.”