Editor’s note: This post was updated from the print edition on Aug. 7, 2019 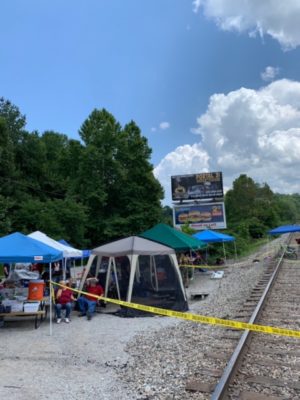 Miners and their supporters block the train tracks in Harlan County, Ky., on July 31. Photo by Caleb Gore

On July 1, coal companies Blackjewel and Revelation Energy announced they were entering Chapter 11 bankruptcy. The announcement is one in a long string of bankruptcies plaguing the coal industry, though this bankruptcy is unfolding differently than others — mines shut down immediately, workers had paychecks retroactively withdrawn from accounts, and Jeff Hoops, the founder and leader of the companies, was forced out within days.

The companies employed about 500 miners in Virginia, about 600 in Kentucky, about 30 in West Virginia, and none in Tennessee during 2018, according to the U.S. Mine Safety and Health Administration. They also employed about 700 miners at two large Wyoming mines that were passed to Hoops following the Alpha Natural Resources bankruptcy restructuring in 2015.

It’s difficult to assess the potential impact of this bankruptcy on mine reclamation in the region. Staff at Appalachian Voices, the nonprofit organization that publishes this newspaper, have determined that the companies are responsible for roughly 13,000 acres of unreclaimed mine land in Kentucky, Virginia and West Virginia, a number that is likely to rise as the analysis continues. In all three states, taxpayers could potentially be on the hook for mine cleanup costs if the companies cannot find another buyer for the properties.

The contingent grew to dozens of miners and their supporters, who set up a camp complete with cook stations and kids toys. Several organizations are accepting donations for affected families in Kentucky and Virginia.

The protest continued into its second week as news emerged about Blackjewel’s bankruptcy auction and hearing. A federal district judge agreed on Aug. 6 to a sale of some of the company’s assets, though the deal awaits federal approval.

“That won’t pay off all of the wages that are due, but it’ll be a good downpayment,” labor attorney Sam Petsonk with legal advocacy organization Mountain State Justice told Ohio Valley ReSource. “So additional wages and penalties damages that are owed to the workers will have to come through further litigation.”