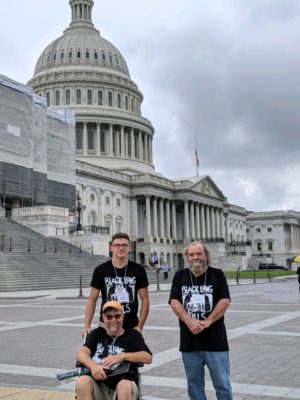 Clarence Whisenhunt and David Mullins with David’s nephew Holden Hunnicutt were among the delegation that traveled to Washington, D.C., to advocate for fair policies for miners with black lung disease. Photo by Marcy Tate

Approximately 150 coal miners, widows and their loved ones traveled by bus from across Appalachia to Washington, D.C., to demand that Congress reinstate the tax rate that supports the Black Lung Disability Trust Fund and extend that rate for 10 years.

For miners suffering from the severe health effects of black lung disease, making the trip in the July heat was a challenge. In the capitol, the delegation met with 22 congressional offices and held a roundtable discussion that included four U.S. senators, miners and the president of the United Mine Workers of America. Miners and miners’ widows shared powerful testimony about the debilitating effects of the disease and the frustrating process required to access modest medical and living benefits.

Black lung disease is caused by repeated exposure to coal and silica dust, and rates of the deadly disease have hit a 25-year high in Appalachian coal mining states. The Black Lung Disability Trust Fund helps support coal miners and their surviving dependents in cases where the miners’ employer has gone bankrupt or has been found not responsible. Several coal companies have recently declared bankruptcy, highlighting the importance of this fund — but its solvency is in jeopardy.

The trust fund is supported by a small excise tax paid by companies per ton of coal sold domestically, at a rate that was unchanged for more than three decades. But Congress failed to extend the tax rate before the end of 2018, and it has now been cut by more than half. A May 2018 Government Accountability Office report projects that, at the slashed tax rate, the fund’s revenue will be unable to cover beneficiary payments and administrative costs as soon as 2020.

Senate Majority Leader Mitch McConnell (R-KY) met with miners for a couple minutes and offered assurances that benefits would not be cut, but did not commit to restoring the tax.

While in Washington, D.C., the miners also urged the Mine Safety and Health Administration to enact a rule to lower the amount of silica miners can be exposed to in an effort to prevent the spread of this incurable, but preventable, disease.

The miners were joined by numerous organizations including chapters of the Black Lung Association, Appalachian Citizens Law Center, BlueGreen Alliance, Kentuckians For The Commonwealth, The Alliance for Appalachia and Appalachian Voices, the nonprofit group that publishes this newspaper.