Disrupting the Status Quo and Putting People and Planet First

A Note from our Executive Director 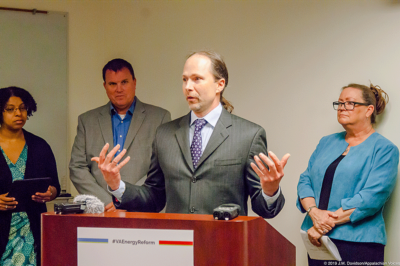 It’s all too common for government to give corporations special privileges.

In theory, state and federal governments do this to harness the profit motive for the benefit of consumers, jobs and the social good.

Unfortunately, when we give utilities the special privilege of the government literally outlawing competition when it comes to selling electricity, we are doing just the opposite. This is true whether the utility is a giant corporation, a government-owned entity or an electric cooperative that is unresponsive to its local member-owners.

Appalachian Voices works with small, nimble, entrepreneurial businesses with the technology and business models to deliver clean solar power at competitive rates. And we work with local citizens and leaders who want these businesses to create local clean energy jobs and generate wealth in their communities.

The problem we face is that the monopoly utilities want to hang on to that wealth for themselves. They fear a competitive market.

And so their lobbyists swarm our state capitals, pushing legislation to protect their monopolies and maximize their income.

The harm is felt far from these capital cities. It’s felt by rural residents trying to bring locally generated solar to places where the economy used to be dominated by big outside coal companies. And it’s felt by ratepayers like you and me who are being forced to pay for multi-billion dollar pipelines and power plants that ransack our land, pollute our air and water and disrupt our climate.

Why? Simply because our government guarantees utilities a hefty rate of return — paid by us — on all the billions of our dollars they spend building things.

So on May 7, we joined partners from across the political spectrum in Richmond to announce the formation of the Virginia Energy Reform Coalition, a group that aims to dramatically reshape the state’s electric utility policies to advance consumer choice and clean energy competition.

On May 14, we and fellow advocates called for an investigation into ratepayer dollars that the Tennessee Valley Authority paid to a lobbying firm connected to federal attempts to weaken clean air rules. And on May 21, we joined allies in Raleigh to urge North Carolina lawmakers to block Duke Energy’s latest attempt to gouge ratepayers.

We are committed to disrupting a status quo designed to line the pockets of the government-protected utility monopolies who have been calling the shots. We are citizens demanding a system that puts people and the planet first.

And we need you to be part of this movement. Get involved at appvoices.org.