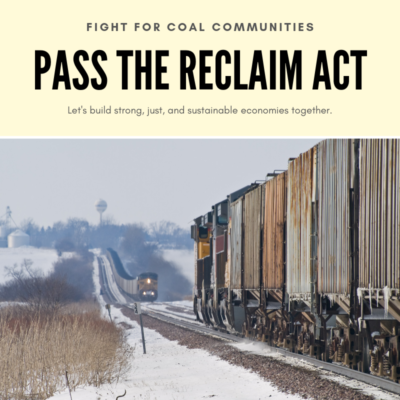 Ever since the federal surface mining law went into effect in 1977, coal companies have paid a tax on coal production to pay for the reclamation of the millions of acres damaged by mines that were abandoned before the 1977 law. The fund currently has an unappropriated balance of $2.4 billion, $1 billion of which isn’t scheduled to be spent until after 2023. Starting in fiscal year 2020, the RECLAIM Act would accelerate spending of that $1 billion, distributing it to states and tribes over five years.

The RECLAIM Act provides a clear way for lawmakers to bring new jobs to these communities. It prioritizes the reclamation of sites that are connected to long-term economic projects supported by local communities, such as agriculture, renewable energy, wildlife habitat or recreational tourism projects. These endeavors would put laid-off miners – who possess the skills necessary for mine reclamation – and others to work. Government estimates show the funds could create at least 4,600 direct reclamation jobs across the country.

Instead, Congress began appropriating funding in 2016 for a project called the AML Pilot Program, which was intended to demonstrate what could be accomplished on a wider scale with passage of the RECLAIM Act.

The AML Pilot Program’s shortcomings relative to the RECLAIM Act provide yet another reason to pass H.R. 2156 as soon as possible.