Barring the Way to Disease 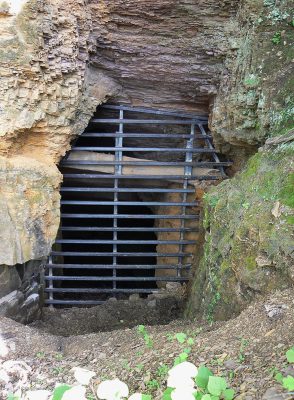 A bat gate blocks a mine entry in Virginia’s George Washington and Jefferson National Forest. Photo courtesy of USFS

Bat-friendly gates are barriers placed over the openings of caves and mines that allow bats to freely fly in and out but prevent humans from entering. Bats awakened during hibernation use up energy stored as fat, which can lead to starvation, especially if they have been infected by the fungus that causes white-nose syndrome. Humans entering caves or mines can unknowingly spread the fungus. The gates also protect humans by keeping them out of dangerous areas.

“Bats can be awakened by human entry even if the humans are quiet – their presence is enough to rouse the bats,” U.S. Forest Service Biological Technician Mike Donahue says. “Smoke from campfires within the cave or even blowing into the cave from a campfire at the entrance disturbs the bats. Smoke from campfires is bad any time, since the bats can be suffocated.”

If Donahue determines that bats use a cave or mine, staff and volunteers build the gates onsite. The sites often lie in steep terrain and construction requires heavy materials and equipment that must be transported by hand, which can be dangerous.

The biggest obstacle Donahue faces is the small number of people who resist having the cave or mine closed to their entry. Some gates are vandalized or breached, rendering them ineffective.

According to U.S. Forest Service Public Affairs Specialist Rebecca Robbins, in 2009 the Forest Service closed all caves and mines on national forests in the agency’s southern region to human entry for one year. The Forest Service extended the closure multiple times, including in 2014 when it was extended for an additional five years through 2019.

“We are hopeful that bats can continue to be protected as long as necessary – they are a critical part of our ecosystem,” Donahue says.