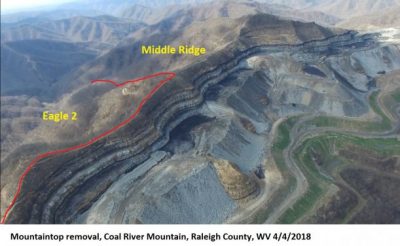 In November, Coal River Mountain Watch, the Sierra Club and Appalachian Voices, the publisher of this newspaper, filed a federal lawsuit against mining company Republic Energy to halt coal mining activities at the Eagle 2 site in Raleigh County, W.Va. The groups state that Republic is unlawfully mining one of the only remaining intact ridges on the heavily mined Coal River Mountain with a permit that expired in 2011.

“Republic has waited 10 years to begin mining the Eagle 2 permit. In that time, demand for coal has decreased substantially,” says Debbie Jarrell, co-director of Coal River Mountain Watch, which is based near the mine site. “There is no conceivable reason that this mountain should be mined at this point.”

Surface mining permits terminate after three years if no mining has started and if the permit holder has not met standards for an extension, and this permit was issued in 2008.

Although Republic did not start mining or file for an extension before 2011, the West Virginia Department of Environmental Protection treated the mining permit as valid when the company began mining operations in spring 2018. Plaintiffs argue that the company did not request several additional extensions and did not offer a valid justification for why it waited an additional seven years to begin mining.

Environmental groups state that a new permit would take into consideration the most up-to-date information such as existing levels of water pollution from nearby mines, and incorporate up-to-date mining requirements.

The DEP has issued multiple notices of violation to several adjacent permits on Coal River Mountain, including 11 in the last two years to the operators of Middle Ridge Mine.

“What our communities need now is support in developing a new economy that benefits local people, promotes well-being and preserves the environment,” says Jarrell. “Mining at Coal River Mountain is more than just about a permit; this is our lives being erased to pander to the few wealthy coal corporations.” — By Erin Savage