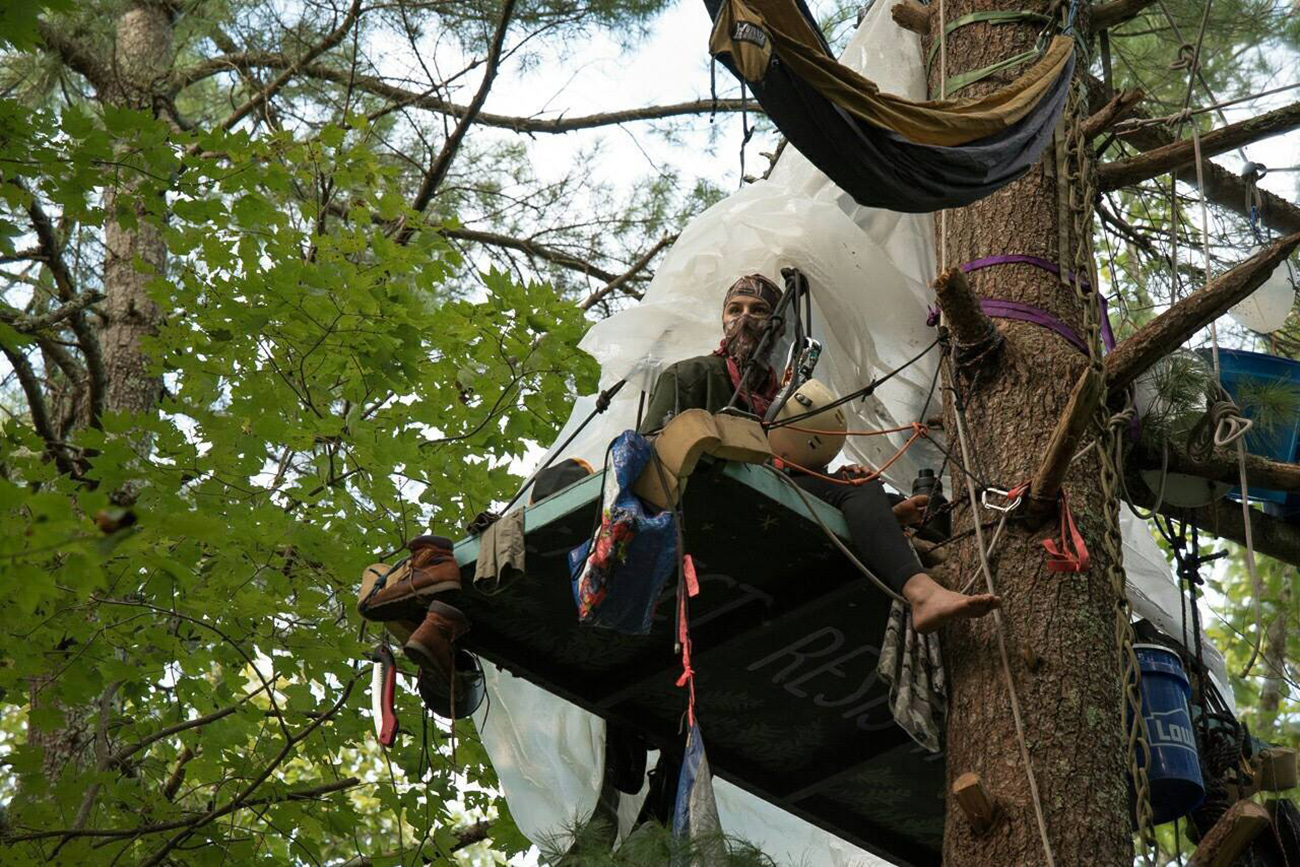 The tree-sitter known as “Nettle” on their platform in late September in the path of the Mountain Valley Pipeline near Elliston, Va. Photo by Will Solis

Two new tree-sits have been standing in the path of the Mountain Valley Pipeline near Elliston, Va., since Sept. 5. The tree-sitters — Phillip Flagg and a person known only as “Nettle” — are on Cletus and Beverly Bohon’s property near Elliston, Va. The tree-sit occupied by Flagg was previously held by 24-year-old Montgomery County, Va., resident Lauren Bowman for 38 days until she descended on Oct. 12, according to Appalachians Against Pipelines.

“They don’t seem like violent criminals or nothing,” Cletus Bohon told the Times. “They were nice and friendly. I kind of understand what they’re fighting about.” 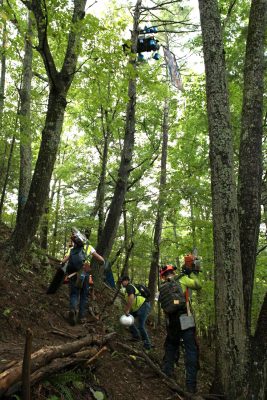 Mountain Valley Pipeline loggers carrying chainsaws walk beneath one of the tree-sits. Appalachians Against Pipelines states that many trees were felled near the sitters’ trees despite contractors’ orders to give a wide berth. Photo by Will Solis

Mountain Valley contractors have repeatedly cut trees that were close to trees supporting the protestor platforms, according to Appalachians Against Pipelines.

“Despite [Mountain Valley Pipeline] security telling loggers to stay 200 feet away (in past days), trees were cut under 100 feet from the sits and rigging, and fell to within 20 feet,” reads a Sept. 30 post on the group’s Facebook page. “As supporters tried to protect the safety of tree-sitters today, MVP called the cops and law enforcement responded to protect the interests of the pipeline company. No arrests were made.”

Mountain Valley Pipeline has sparked outrage in other parts of the region. In Summers County, W.Va., a helicopter dropping erosion-control pellets over the path of the pipeline missed its target by a quarter-mile, pelting Neal Laferriere and his children on their family-owned organic farm in September, according to WVVA Television. Laferriere states that the pellets now cover nearly three-fourths of his farmland, and that Mountain Valley told him there is “absolutely nothing you can do to clean this up.” Laferriere said he is worried this could void his farm’s organic certification, which would reduce the price of black cohosh, one of their crops, from $38 per pound to $5 per pound.

“It just feels like we’ve been steamrolled, abused. Like they just don’t care,” Laferriere told WVVA Television. Mountain Valley released a statement explaining that they have taken steps to prevent this from happening again and will work with Laferriere to address his concerns.

Pipeline construction crews upset Bent Mountain, Va., residents when they continued work for several days after the Virginia Department of Environmental Quality directed a temporary halt due to the impending Hurricane Florence. While the DEQ stated that any construction in those days would be focused on strengthening erosion controls, the citizens’ group POWHR Coalition reported seeing crews digging trenches and welding pipes in that time.

“This place has already been established as incredibly fragile,” POWHR Coalition Co-Chair and Bent Mountain resident Roberta Bondurant told WDBJ7, describing Bent Mountain. “You have an incredibly unsound base on which to lay your 42-inch fracked gas pipe.”

Author’s Note: This story was updated from the print version on Oct. 17, 2018, to reflect the change in tree-sitters near Elliston, Va.