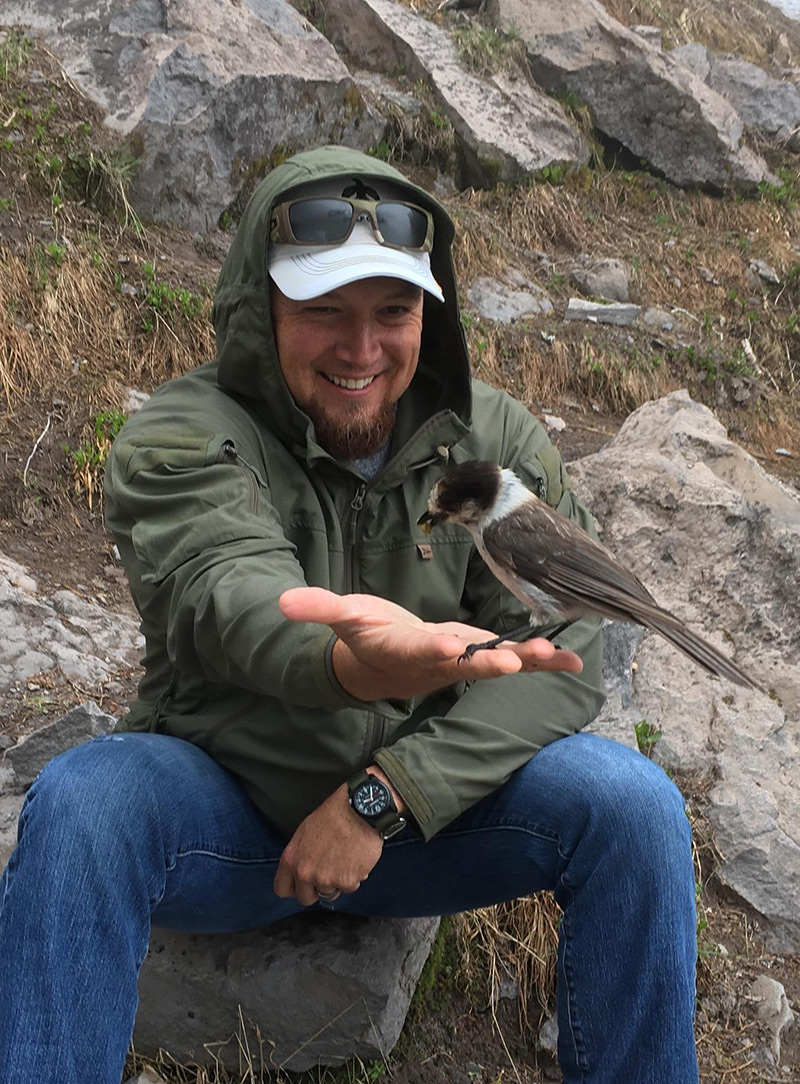 Tommy Cabe is the Tribal forest resource specialist for the Eastern Band of Cherokee Indians, and a Tribal member from the Bird Town Community. He is also a member of the Nantahala-Pisgah Forest Partnership, a collaborative group of conservationists, cultural interests, recreational users, timber industry representatives and more who are seeking to shape the revision of the Nantahala and Pisgah national forests’ management plan.

“I grew up using the landscape. I used it as a place to go hunting, fishing and also gathering edibles. So my relationship, like a lot of kids growing up in the western part of the state, with a lot of the lands surrounding us being public land, you just grew up in the outdoors basically.”

“As we all know, it used to be a place that we belonged to as the Cherokee. It used to be aboriginal landscape. The parts that are designated “Pisgah” and “Nantahala” are Cherokee names.”

“Growing up here on the Qualla Boundary and being able to actually enjoy those landscapes as a citizen of the United States is a privilege, but to also be able to practice the cultural and historical knowledge that pre-dates the creation of the United States is cherished within me. And that I’m fortunate enough to be taught some of those things about the landscape, how to hunt and fish and collect certain things that are part of our cultural food lifestyle. It’s been a privilege to be able to go to these public lands and have access to those things.”

Do you have a favorite place in the Pisgah and Nantahala national forests?

“I think it’s all worthy of better protection. I feel that there is a need for more enforcement, especially if some of our non-timber products are at risk. Some people forage off the wild landscape, and you have restaurants paying top dollar for some of these edibles. I think that I would like to see that better preserved by enforcing bodies and more of a permit requirement on certain things that you take from that landscape.”

“The tribe is recognized as a special interest group. Once the plan gets in a pretty solid draft format, then we’ll get the opportunity as a whole to review it too; or we should. And it’s then that we would address any issues that we may have before it goes into the full, bonafide plan.”

“We would encourage change and bring it up. We wouldn’t demand a change, we would say, ‘we have a concern about the way this language is written regarding this particular area within the Pisgah or Nantahala landscape.’”

“I think it’s important because a lot of these interest groups have conservation- and preservation-minded interests. They also have their own personal self-interest as we all do. But I think the revision process is important to allow the landscape to react as it’s being utilized. As users of the landscape, we need to all be aware that landscapes can get overused. I think that that’s something that we’ve just started to see here in the last 30 to 50 years, and I think that people are becoming more and more conscientious of their own personal interests because: A, they’re aware of how they impact the land, and B, I don’t think people necessarily want to pick another fight with another interest group. So this revision plan process, I think, is the mechanism that allows for human presence to also be monitored and controlled for the benefit of the landscape.”

What advice, if any, would you give the Forest Service?

“I would hope that the interest first would reside in the landscape before it would human interests. My advice is just to listen to the landscape. And we’re able to do that now, with all the science that we have. If you can just listen and observe, it can tell you a lot.”

“Some folks that aren’t native don’t believe that at all. They have an ego and believe you can over-utilize the land. And their interest kind of takes precedent within their own mind. They have blinders on. Not the [Forest Service], I would hope they would be more open-eyed. It’ll be interesting to see how this turns out, but so far we have good relationships with [the Forest Service] and hope to continue that. We have good relationships with some of our partners sitting around the table, too.”

“I think the Forest Service should actually put more jobs out there for indigenous people that are within their own native land. They consult with us, yes, but it’d be nice to see more native folks locally in a U.S. Forest Service uniform working for that agency. Because what you do is you’re able to bridge a gap when you have a native person coming in, a tribal counselor to their government, talking about the landscape that used to be part of them, and how is it to be managed for their interests. That speaks volumes, because you have all kinds of people in the Forest Service that like to mountain bike, hike and hunt and cut trees down, but you don’t have any natives really.”

“There’s a couple programs [to get indigenous people into the Forest Service], but typically what these programs do is they send the kids out West or they send them somewhere where bodies are needed. I don’t think that there’s always a lot here locally. I could be wrong.”

“I think so. There’s probably different variances in landscape, characteristics that dictate that to be a wilderness area, but it’d be nice to know what that means, what dictates an area to be designated as wilderness. There’s a definition out there I’m sure, but one of the things that we’re doing here recently in the tribe is we’re figuring out how much the English language complicates things.”

We’re trying to translate all of our documents into our Cherokee syllabary, because the English language is complex. Sometimes that complexity can make it difficult to do anything positive, especially within land management. There’s certain words that we don’t have in the Cherokee language. And we try to apply that word, it just screws everything up.

“Well I think that it’s kind of a health issue with the landscape. I think through time we’ve recognized to take so much off the landscape … could have a devastating impact on forest health. And I think that the industries and other interests are starting to become, I hope, observant of other interest groups. And I feel there should be a layer of respect that cloaks that landscape.”

“It all goes back to the human needs and wants. For instance, there’s a county in Western North Carolina that is jockeying to have more timber sales and more timber removed. I agree that clearcutting actually is beneficial to certain wildlife, that early successional forest benefits a lot of game species. But I don’t think that it needs to be foolishly enacted, I think it needs to be wisely carved out of forested landscapes that do need it and can benefit from it.”

“I think that the less politics and the political interests stays out of this — which is probably impossible to ask — I think it could actually ultimately serve as a better landscape for the future.”

“I think that our conflict is our culture. I think a lot of people still are uneducated about the first people that were here, and that’s us. And now we have rights that are supposed to be heard because we’re a sovereign nation. We have a trust relationship with the federal government, and I believe a lot of people just aren’t aware of that. If we designate a spot in that landscape as a cultural site, then yeah it does make it a little harder for them to go in and clearcut it. It’d be about like clearcutting somebody’s graveyard.”

“The mountain bikers ain’t always going to be there mountain biking. The horse riders ain’t always going to be there horse riding. They’re active, yes, but I think there’s room to let things rest. You need to let the landscape rest. And also you need a working landscape, too. I think it’s just a balancing act. Finding that balance is challenging.”