One Neighborhood’s Fight for Representation

How One Community Won Clean Water and Voting Rights

Springtime in Stokes County, N.C., is warm and green, with hardwood trees leafing out, fields full of flowers, and small white churches nestled among the greenery. The rural nature of the county does not seem to have changed much in the past 100 years. Horses still wander in the pastures, and folks still know their neighbors. But for one small community in the county, things are finally changing, after a decades-long fight for voting rights and clean water. 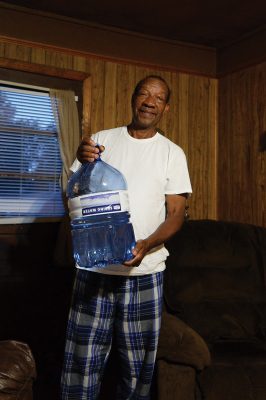 Dave Webster and his wife, unable to drink the water in their home for the past 20 years, will no longer have to rely on bottled water thanks to the annexation. Photo by Charles Leftwich, courtesy of The Stokes News.

Walnut Tree is a predominantly African-American community, while Stokes County is mostly white. Mortgages for the houses of Walnut Tree were originally offered by the Farmers Home Administration, a former federal agency, as part of an effort to increase homeownership among African-Americans in the South. Although African-American residents in the area did move from renting to owning their own homes through the program, people in the Walnut Tree neighborhood soon found serious issues with the water, which was supplied by a private system.


“It smelled bad, like rotten eggs,” explains David Hairston, president of the Walnut Tree Community Association and leader of the most recent fight for annexation. “It was discolored too.”

Not only was the water unusable, discolored and sediment-laden, it was also expensive. Residents of Walnut Tree paid about twice as much for their water as those within town limits. Until being annexed, Hairston, who recently became a board member of Appalachian Voices, the publisher of this newspaper, paid $108 every two months just to keep the water in his mother’s house turned on. Now he pays $84 every two months for town water, which doesn’t smell, and that cost includes trash pick-up.

The water was so bad that in 1995, the Farmers Home Administration advised that it would suspend any new loans for houses in the Walnut Tree development until there was “a dependable and acceptable source of water.” To this day, many of the lots in Walnut Tree remain empty because developers would not build knowing the water quality was so poor.

Twenty years ago, Stokes County received a $260,000 grant for a new private water system for Walnut Tree that was built and then sold by the county to the Town of Walnut Cove for a small fee. Walnut Tree was at that point connected to town water, but still residents found the water unusable and the bills exorbitantly high. Additionally, their concerns about the water and its source — was it actually coming from the town well? — were ignored by town officials.

In addition to suffering from poor water quality, residents also dealt with air quality issues caused by the neighboring coal-fired power plant, Duke Energy’s Belews Creek Steam Station. Since the neighborhood was built, residents of Walnut Tree were exposed to coal ash — the toxic by-product of burning coal —which in the ‘70s and ‘80s fell visibly on houses, cars, gardens, and, according to some residents, was even disposed of in large, uncontained piles within the neighborhood.

Disproportionately burdened by pollution and ignored by town officials for decades, the fight for annexation was not just about water, it was also a fight for representation. Without annexation into the town of Walnut Cove, Walnut Tree residents were unable to vote in local elections for the town board of commissioners and the mayor. Politically, they were powerless to change the water system, and though they petitioned the town for annexation four times, each time the proposal was voted down by the town commissioners that Walnut Tree residents could not vote for.

Ada Linster moved into her home in Walnut Tree in 1972 and has been a leader in the fight for annexation ever since. “Back then,” she explains, “we wanted to be annexed so we could have clean water and have the service that was actually promised to us. But it was also a civil rights issue, they did not want a black person on their board in Walnut Cove.”

Those larger civil rights issues manifested in tangible ways: in 2014, Hairston discovered that the Town of Walnut Cove had shut down Walnut Tree’s playground, where Hairston himself had played as a child. 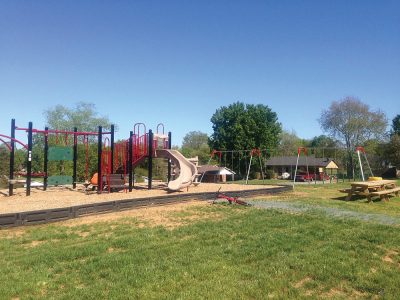 After the Town of Walnut Cove took down the Walnut Tree playground, Walnut Tree residents rallied to build a new playground. Photo by Sarah Kellogg

“The kids had nowhere to play!” recalls Hairston.

“Annexation would have given the children more of a say-so of what was going in our area, instead of things being taken away from us,” says Linster. “They took away their playground and we couldn’t even vote.”

Motivated by his late mother’s wishes, Hairston raised money for a new Walnut Tree playground, receiving grants from several foundations and donations from residents and businesses in Walnut Cove and the surrounding area. The new playground was completed in 2017.

“Everybody helped us get that playground,” Hairston remarks, “except the Town of Walnut Cove.”

“That put us all on notice and we all started working as a group again,” Linster recalls. “We started having meetings, and that’s when everyone could see the light again, because before that we didn’t have any light.”

Over the decades, Walnut Tree residents watched the Town of Walnut Cove annex several other, predominantly white, subdivisions, but still in January 2017, their petition for annexation was denied by a vote of 3 to 2, with the white members of the town board of commissioners voting no. So, in September 2017, with help from the University of North Carolina Center for Civil Rights and the Raleigh-based law firm of K&L Gates, the Walnut Tree Community Association along with independent residents, including Linster, filed suit against the Town of Walnut Cove.

Led by Hairston, the community also started organizing for the upcoming local elections. 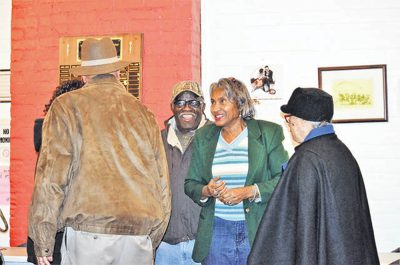 Ada Linster, one of the first property owners in Walnut Tree, celebrating with friends after the community was officially annexed into the Town of Walnut Cove. Photo courtesy of Amanda Dodson, The Stokes News

“Before the lawsuit was settled, we started a write-in campaign,” Hairston explains. “Even though we were not in the town limits we participated in the election system that year by going out and bringing people into the polls to vote that actually live in the town of Walnut Cove. We got 90 percent of the black people that live in the town limits to come out and vote, and persuaded the good old Democratic people and some Republicans that supported us. We had three write-in candidates and all three won, including the mayor who won by about 30 votes.”

Replacing the town commissioners meant Walnut Tree stood a much greater chance of annexation, and in 2018, the lawsuit was settled by consent decree, which allowed the newly elected Board of Commissioners to vote on the issue. This time, the community finally saw victory with the board unanimously voting to annex Walnut Tree into the town of Walnut Cove.

According to Linster, the path to annexation “has been a very long journey, a journey that I think I deserved, a journey that we all deserved. This was a victory, this showed that the barrier has been broken. They finally walked in and picked up a black neighborhood, instead of a white one.”

Building Art and Community While Cleaning Up Coal Ash 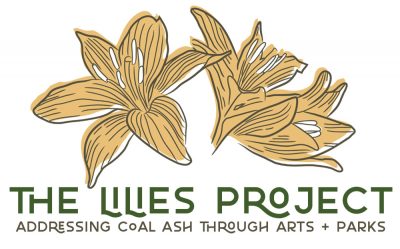 A public art project underway in Walnut Cove, N.C., is intended to raise awareness of the hazards posed by coal ash and to create a community gathering space. Caroline Rutledge Armijo, the project leader, is working with scientists at North Carolina Agricultural and Technical State University to encapsulate the ash in polymer and use it to sculpt large lilies for public display.

By using coal ash as a building material, The Lilies Project aims to demonstrate an alternative to storing the toxic substance in unlined impoundments like the one at Duke Energy’s nearby Belews Creek Steam Station.

The lilies theme honors the late composer Jester Hairston from Belews Creek, N.C., who wrote and sang the music for the 1963 film “Lilies of the Field.”

Another primary goal of the project is to build community in southeastern Stokes County. Since its January kickoff, members of The Lilies Project have participated in the Clean the Cove litter pickup day as well as ongoing efforts to clean up coal ash. Participants also held an oral history event and film screening in March, and plan to collect and share stories from community members. — By Molly Moore