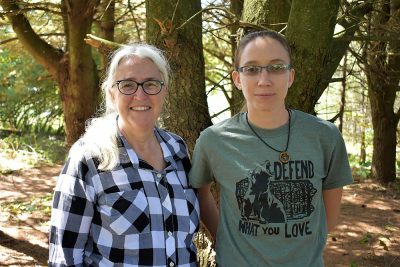 Elise Gerhart has always felt connected to her family’s 27 acres of forest in Huntingdon, Pa.


“My mom kind of raised me with the idea that this land is for conservation, and that it was our role to be stewards for this piece of woodlands,” Elise says. So when Energy Transfer Partners offered the Gerharts $14,000 to cut a three-acre swath for the Mariner East 2 pipeline in 2015, they immediately refused.

When the county court granted the Dallas-based company eminent domain to seize the land in January 2016, the Gerharts still refused to cede — especially because Energy Transfer Partners is also behind the Dakota Access Pipeline. In 2017, Energy Transfer Partners merged with Sunoco, which had more crude oil spills from 2010 to 2016 than any other operator nationwide. 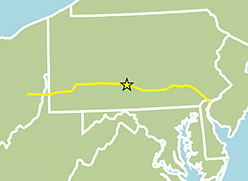 The Gerharts’ home in the path of the Mariner East 2 Pipeline in Huntingdon County, Pa.

When the Gerharts learned that the company would be coming in March 2016 to cut down any trees in the pipeline’s path before obtaining construction permits, the family organized several tree-sits and a non-violent protest on the ground. But the land surveyors didn’t come alone.

“They brought about 20 police with them when they showed up with the tree-clearing crew back in March 2016,” Elise says. “They arrested my mom and two other friends.”

“They put other people on really excessive bails, like $100,000 and $200,000 bails, just for being in the vicinity of the pipeline easement and the tree clearing,” Elise continues.

The company proceeded to cut down all the trees in the easement that did not have people in them. “In two days, they cut down an 80-year-old forest,” Elise says.

The Gerharts and others underwent eight months of criminal court proceedings before the county’s district attorney dropped the charges. When Energy Transfer Partners obtained construction permits in early 2017, the family formed Camp White Pine and invited others to join them in staging an ongoing tree-sit.

The company has a deadline of March 31, 2018, to finish clearcutting due to federal wildlife protections — at press time on March 29, Elise did not know whether she would soon be in jail.

“There’s been a lot of heartache and pain and struggle, but there’s also been a lot of hope and love and support and determination with people taking the power into their own hands,” Elise says. “When [state and county] officials won’t do anything to protect us from these horrible companies, people have stepped up to do it themselves, and that’s really inspiring.”

According to a May 9 press release from StopETP, a coalition of communities and organizations that advocate against Energy Transfer Partners, Ellen Gerhart was placed on a $25,000 unsecured bond after Sunoco lawyers claimed she had violated a court-ordered injunction while surveilling construction of the Mariner East 2 Pipeline. Ellen faces up to six months in jail without trial and possible fines paid to the company. The case was approved to continue through July 6.

“We have no choice but to take a stand and defend what our government officials are unwilling to protect,” Ellen said at a May 9 press conference. “Sunoco made a serious miscalculation when it decided to pick on the citizens of Pennsylvania and other ‘pipeline’ states. The right to clean water is non-negotiable.”

As of May 12, there were 52 reported violations during the pipeline’s construction including a punctured aquifer that resulted in tainted drinking water for some residents. — By Kevin Ridder

Editor’s Note: This story was updated on May 12, 2018, to show recent legal steps taken related to the Gerharts’ and to reflect two more reported violations along the Mariner East 2 Pipeline’s path.

Editor’s Note: This story was updated on April 10, 2018, to reflect three more reported violations along the Mariner East 2 Pipeline’s path.